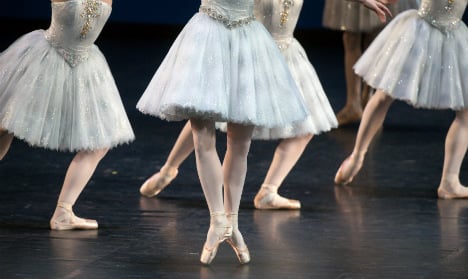 But in a scathing petition posted on the company's homepage on Sunday, the dancers said: “Unfortunately, the appointment has to be compared to an appointment of a tennis trainer as a football coach or an art museum director as an orchestral director.”

They described the nomination as “disruptive and insulting to the company,” and added that the fact that “this announcement comes in the middle of an election campaign leads us to believe that it is politically motivated rather than artistically.”

Berlin votes Sunday in a state election, a timing the dancers find dubious as Waltz's term is due to start a whole three years from now.

Their suspicion is that Waltz, 53, is a big name who will sell tickets but as a choreographer of dance theatre lacks the background for classically-trained ballet.

Her appointment had been broadly welcomed by German media, which had been little impressed by the current director Nacho Duato, noting that none of his three premieres since he joined in 2014 had been a hit.

The Staatsballett is a merger of three companies – Deutsche Oper in west Berlin and Komische Oper and Staatsoper in the east – a legacy of a divided capital.

The conflict plaguing the dance company comes a year after a similar dispute at east Berlin's legendary theatre Volksbühne (People's Stage), over the succession of veteran artistic director Frank Castorf, who is to bow out in 2017 after a quarter-century at the helm.

Berlin authorities, which heavily subsidise the avant-garde theatre and Castorf's daring, politically-charged productions, declined to keep the strong-willed iconoclast much beyond the end of his current contract in 2016.

The director of London's Tate Modern museum, Chris Dercon, has been nominated as his replacement, but some 172 actors and employees of the theatre have written an open letter voicing their “deep concern” over the appointment.

The French baguette – one of the country’s most abiding images – was given world heritage status by UNESCO on Wednesday, the organisation announced.

Here are some of the more popular theories:

Napoleon’s Bread of War
The oldest tale has the baguette being kneaded by bakers in Napoleon’s army. Less bulky than a traditional loaf, the long slim shape of the baguette made it faster to bake in brick ovens hastily erected on the battlefield.

France’s most famous man of war was preoccupied with getting his men their daily bread.

During his Russian campaign in 1812, he toured the ovens daily to sample the day’s offering and ensure the crusty batons were being distributed regularly, according to historian Philippe de Segur.

He also had portable bread mills sent to occupied Moscow, but the setbacks suffered by the Grande Armee in one of the deadliest military campaigns in history ended his bid to export the doughy staple.

Viennese connection
Another theory has the baguette starting out in a Viennese bakery in central Paris in the late 1830s.

Artillery officer and entrepreneur August Zang brought Austria’s culinary savoir-faire to Paris in the form of the oval-shaped bread that were standard in his country at the time.

According to the Compagnonnage des boulangers et des patissiers, the French bakers’ network, Zang decided to make the loaves longer to make them easier for the city’s breadwomen to pluck from the big carts they pushed through the city’s streets.

Breaking bread
Another theory has the baguette being born at the same time as the metro for the 1900 Paris Exposition.

People from across France came to work on the underground and fights would often break out on site between labourers armed with knives, which they used to slice big round loaves of bread for lunch.

According to the herodote.net history site, to avoid bloodshed, one engineer had the idea of ordering longer loaves that could be broken by hand.

Early rising
In 1919, a new law aimed to improve the lives of bakers by banning them from working from 10 pm to 4 am.

The reform gave them less time to prepare the traditional sourdough loaf for the morning, marked the widespread transition to what was called at the
time the yeast-based “flute”, which rose faster and was out of the oven in under half an hour.

Standardised at 80 centimeters (30 inches) and 250 grams (eight ounces) with a fixed price until 1986, the baguette was initially the mainstay of wealthy metropolitans, but after World War II became the emblem of all French people.