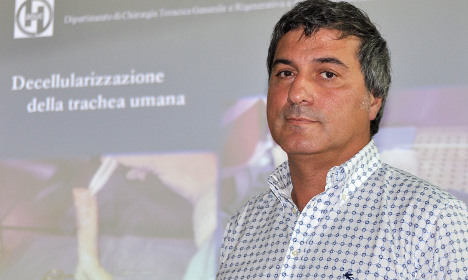 The work in question was published in journal Nature Communications in 2014, and involved tests carried out on rats and their oesophagus. The CEPN concluded that Macchiarini and a number of the co-authors of the article were guilty of research misconduct.

“When you read the article you get the impression that the trial was very successful, but if you compare it with the data which we got, you can see that is not true at all,” Lena Berke, CEPN’s head expert on research misconduct, told news agency TT.

According to Berke, who said that the rats in the experiments suffered huge weight loss, there were a total of three points which amounted to research misconduct.

“We tried to get the raw data and didn’t receive it. We tried to get the trial journals. We didn’t get those, even though they should be disclosed. The article makes a misleading presentation, interpretation and description of the results compared to the data, which we managed to get in spite of everything. It doesn’t stand up,” Berke said.

One of the four doctors who first reported Macchiarini for research misconduct in 2014 said he had been waiting for the CEPN’s opinion.

“Spontaneously I feel like it was the right decision. We pointed out that there was very misleading information in this article when we reported it,” Karl-Henrik Grinnemo told TT.

“It is very important that the article is now withdrawn from the PubMed research database so it does not form the basis of any operations on people.”

Surgical sciences professor at Uppsala University Bengt Gerdin last year presented a report to the Karolinska Institute (KI) where he claimed that Macchiarini had been guilty of research misconduct in his work. He welcomed the CEPN’s verdict.

“It is completely fair. My assignment was to assess other documents and I had much more restricted material to work with, but I could already see that it was misleading,” he commented.

“If you could start from the bottom of the other work that wasn’t published in Sweden, I wonder what that is like.”

Accusations of research misconduct were first levelled at Macchiarini in 2014, when four doctors at Karolinska University Hospital reported him to then KI president Anders Hamsten.

The whistle-blowers were concerned that Macchiarini may have distorted the facts about his operations with artificial tracheas when he presented them in scientific journals.

In March, Macchiarini was acquitted of charges of research misconduct by KI’s ethics council. An external investigation by the Swedish National Council on Medical Ethics has since criticized the surgeon’s transplants of synthetic trachea however, saying there were “shortcomings in how the decisions about the transplants were made”.

The CEPN will next make an assessment of Macchiarini’s research articles on the trachea operations carried out at Karolinska. The operations caused controversy in Sweden when two of the patients involved later died, and one was forced to have a new transplant in the US.

The scandal has caused several resignations at KI, and even led to two of the university’s former presidents losing their places on the panel which awards the Nobel Prize in Physiology or Medicine.