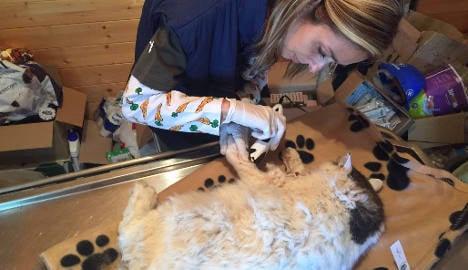 “He's hurt, but alive. He's called Pietro,” said Italian animal protection agency ENPA, which has assisted in caring for the lucky feline along with hundreds of other pets who were victims of the quake.

Firefighters were accompanying Pietro's owners to retrieve personal belongings from the house, when they heard some weak miaowing.

When the family realized their pet, whom they had given up for dead, was still alive under the ruins, they assisted in the rescue. A video of the moment can be seen below:

“Every life saved is an indescribable emotion. And luckily, miracles never end…” said ENPA, using the hashtag '#ForzaPietro' (go Pietro), It added that the cat's family were “astonished and emotional in equal measure”.

Pietro was taken to the local vet and then rushed to the larger clinic in Rieti due to his deteriorating health. Initial x-rays showed he had suffered a fractured jaw, and he is set to undergo further exams to assess his condition as well as surgery on his jaw.

ENPA has been updating followers on the condition of the animals rescued from the quake-damaged towns via its Twitter page. It has sent its workers on bicycles to deliver pet food and other assistance to hard-to-reach areas, as well as caring for injured animals in clinics.

Another cat, named Gioia, survived five days in the ruins of her home before being rescued, and a golden retriever called Romeo was pulled from the rubble of Italy's earthquake more than nine days after he was given up for dead.