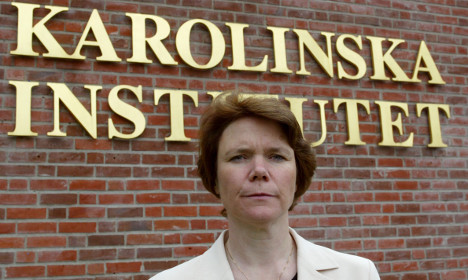 Harriet Wallberg during her spell as the Karolinska Institute's president. Photo: Bertil Ericson/TT

Harriet Wallberg was president of the university when Macchiarini was employed in 2010. The Italian surgeon’s experimental synthetic trachea operations have sparked controversy in Sweden after several patients died, with allegations over alleged ethical misconduct raised.

A report carried out by a former president of the Supreme Administrative Court of Sweden, Sten Hecksher, was released on Monday, and it included criticism against those in charge at KI during Macchiarini’s spell there. Later that day, Wallberg was sacked from her most-recent post as Sweden's university chancellor.

But in an opinion piece published on Thursday by Swedish newspaper Dagens Nyheter,  Wallberg fired back, insisting that the criticism of her is misleading.

“If I had known what I know today, he (Macchiarini) obviously would not have been employed,” she wrote in the column.

The former KI president suggested that people in the media as well as Sweden’s minister for higher education and research Helene Hellmark Knutsson had drawn conclusions from the investigation without first checking facts.

Wallberg then went on to detail the appointment of other professors at Gothenburg, Lund, Stockholm and Uppsala universities, concluding that the process of employment there was no different to the one she used to bring in Macchiarini.

The former KI boss also criticized Heckscher, arguing that the investigator made it appear as though she actively participated in extending Macchiarini’s spell at KI, which according to Wallberg is “not true”.

The Macchiarini scandal has been costly for Wallberg. On top of losing her role as chancellor, she has also been dropped from the Nobel Assembly at the university, which awards the prestigious Nobel Prize in Physiology or Medicine every year.

The assembly’s secretary Thomas Perlmann explained on Tuesday that confidence in Wallberg as well as another ex-KI president, Anders Hamsten, had been “exhausted” due to their roles in the Macchiarini controversy.