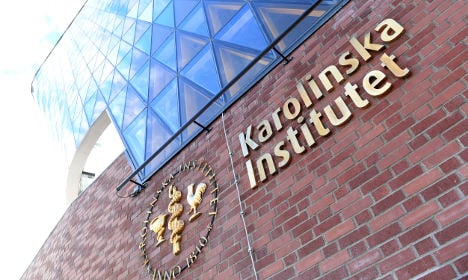 An assembly at the Karolinska Institute awards the Nobel Prize in Physiology or Medicine. Photo: Fredrik Sandberg/TT

KI's assembly awards the Nobel Prize in Physiology or Medicine. Its secretary, Thomas Perlmann explained that confidence in former university bosses Harriet Wallberg and Anders Hamsten had been “exhausted”, and that the decision to remove them from the panel was decided after talks between key people at the Nobel Assembly and the Nobel Committee.

“Confidence in the two presidents, Harriet Wallberg and Anders Hamsten, is so extremely damaged that it has been exhausted. The damage is so great and of such a nature that we invite them to resign from the Nobel Assembly,” he told news agency TT.

While there is no formal method of removing the two members from the assembly, a call to resign has the same effect in practice, Perlmann said.

“We expect of course that they will want to resign. They have no chance of participating in the Nobel work again regardless of whether they resign or not.”

Wallberg had been a member of the Nobel Assembly since 2002, and was KI’s president, the term used by KI, when Macchiarini was employed. The surgeon’s experimental synthetic trachea operations on critically ill patients have caused controversy after several died and questions were raised over alleged ethical misconduct.

A report published on Monday blasted KI for not properly looking into the Italian’s background before hiring him, as negative reviews of his performance had emerged from previous employers. Later that day, Wallberg was removed from her most recent position at KI as chancellor.

Hamsten meanwhile resigned from his role as KI’s president in February when the university announced it was reopening an investigating into research fraud by Macchiarini, who was still employed at the time.

The surgeon this week broke his silence on the events in a written statement provided to public service broadcaster SVT in which he protested his innocence.

“I have never been guilty of mishandling research and have always done my best for my patients,” he wrote.

“Allegations of malpractice within my research group are, in my opinion, purely malicious.”