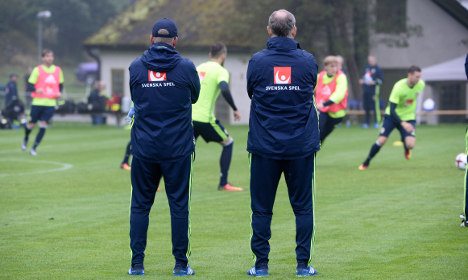 After a dismal showing at Euro 2016, Sweden's all-time high scorer put an end to his 116-cap international career, leaving big boots to fill.

The Swedes are now turning the page to begin the post-Zlatan era.

“I had a conversation with Zlatan where he was perfectly clear. This chapter is closed,” Sweden's new coach Janne Andersson said in late August. “There's no point in thinking about how things used to be.”

Andersson now finds himself building a team from scratch. In addition to Ibrahimovic, five other players have quit the squad after the Euros, including goalkeeper Andreas Isaksson, defender Erik Johansson and midfielder Kim Källström.

The side on call for Tuesday's match is full of new recruits. Two players are expected to make their international debut, Marcus Rohdén, 25, and Alexander Fransson, 22.

The pillars of the team are now captain Andreas Granqvist, his fellow defender Victor Lindelöf – a young hopeful at Benfica – and Albin Ekdal, a playmaker who will sit out against the Netherlands due to injury. In other words, Sweden poses little threat in Group A, which also includes France, Bulgaria, Belarus and Luxembourg.

Andersson is fully aware the team will need some time to find its form.

“I can't guarantee victory. But I can guarantee that we are 100 percent professional,” he told daily Aftonbladet recently. The Swedes at practice ahead of the qualifying match. Photo: Janerik Henriksson/TT

To give Andersson the best shot at success, the Swedish Football Federation has provided him with an adviser who worked miracles at the Euro as Iceland's coach, Swede Lars Lagerbäck. But so far he has stayed in the shadows and it is unclear what exactly his role will be.

Andersson, who won the Swedish first division championship in 2015 with Norrköping, is known for his tough, no-nonsense style and an offensive game, a stark contrast from his predecessor Erik Hamrén, who infuriated fans with his cautious, defensive style.

Barely wet behind the ears, Andersson has already courted controversy by insisting that all players sing the national anthem, something Ibrahimovic never did. He later backed down and said singing would not be mandatory.

And just last week, he took the squad out into the woods to have them build a barbecue as a team-building exercise. It took them two-and-a-half hours and team spirit was bolstered. The same day, the Netherlands played a friendly against Greece and lost 1-2.

As far as game strategy goes, Andersson hopes to forge a more well-balanced team that works together – a change welcomed by observers.

Sportswriter Mathias Luhr, of Swedish daily Expressen, said he believed in “this much-needed and interesting fresh start, with a team rather than a Hollywood production made up of one superstar and slew of (pretty) anonymous sidekicks”.