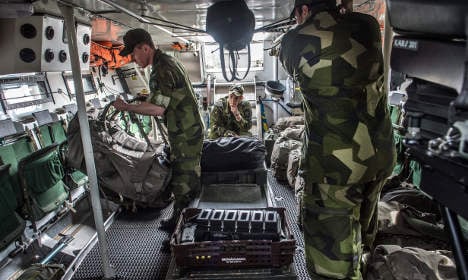 Swedish Defence Minister Peter Hultqvist has previously said that the government is considering reintroducing conscription to beat waning staff numbers in the military.

On Wednesday the Svenska Dagbladet (SvD) newspaper reported that an inquiry launched by the Social Democrat-Green government is soon set to propose a return of the draft for both men and women in 2019.

The final report is expected to suggest that all 17-year-olds in Sweden should next year fill out a questionnaire for future recruitment to the Armed Forces. The following year those teenagers who have been selected will be instructed to enrol.

The new model will be a lighter version of Sweden's former conscription system. This time only a few thousand people from each year group will be drafted into compulsory service. People will still, as is the current system, be able to volunteer for military service.

Former member of the defence committee in Sweden's parliament Annika Nordgren Christensen, who is leading the inquiry, declined to comment on the proposals before they are presented in September, but said she had been given “specific” directives.

“The task is to find out how we can create a system which continues to be based on free will and how to combine that with service duty as they do in Norway and Denmark,” she told SvD.

Conscription for all males was introduced in Sweden in 1901, but in practice it had been winding down for years before it was formally ditched by the then centre-right government in 2010.

During the height of the Cold War nearly 85 percent of Swedish men carried out military service, with some 50,000 drafted out of an age group counting 60,000 men.

A survey carried out earlier this year by major pollsters Ipsos on behalf of the Dagens Nyheter newspaper suggested that 72 percent of Swedes would throw their support behind conscription. Only 16 percent of respondents said they believed it was a bad idea.