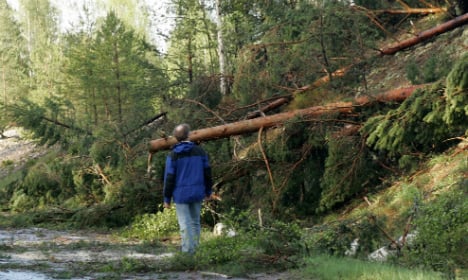 The winds are also expected to blow away the warm weather that the Swedes have been blessed with in the past few days. Photo: Peter Arwidi / TT file picture
TT/The Local
[email protected]
@thelocalsweden


Strong gusts, forecast to reach up to 21 metres per hour, left thousands of people without power in Sweden’s northern regions on Saturday.

The Swedish Meteorological and Hydrological Institute (SMHI) issued a class 1 warning for the regions of Jämtland, Gävleborg and Västernorrland and urged people in those areas to avoid getting on the roads with their cars.

By lunchtime, at least 6,000 homes had been hit by power outages, Swedish news agency TT reported, and several trees had been knocked down by the strong winds, blocking some roads.

In Jämtland, in the northwest, a tree fell on a power line and caught fire.

“We’ve been out and helped the Swedish Transport Administration remove between five to 10 trees,” Henrik Jönsson, a spokesman for the local rescue services, told local daily Östersundsposten.

SMHI warned that the winds were likely to pick up even more throughout the day, but are expected to slow in the beginning of the evening.

“[The winds] can reach up to 21 metres per second, and even a bit more than that,” SMHI meteorologist Sandra Andersson said.

The agency added that the winds are likely to bring down the warm temperatures that the Swedes have been able to enjoy in the past few days, bringing in more volatile weather, including some rain in the south.