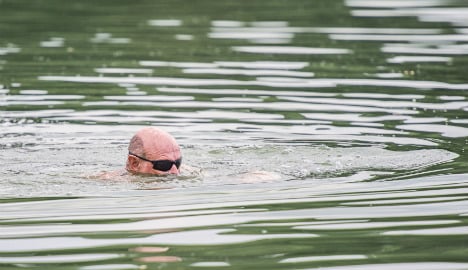 At first the man thought he had just become tangled in some weeds, but when he looked down he noticed in horror that a fishing hook was tugging at the most sensitive part of his body, the Augsburger Allgemeine (AA) reports.

The man, who told the local paper he wished to keep his identity secret, is a regular at Augsburg’s Kaisersee, a popular bathing spot for naked swimmers.

He was doing the crawl with his head under the water when he felt the unpleasant sensation in his thighs – and only then did he notice that there was a fisherman on the shore.

After he shouted out his warning to the fisherman to hold still, he swam towards the angler's position on the bank.

It was then that he realized the extent of the problem: the hook had pierced his penis and he was unable to remove it.

Using a knife which the fisherman had on hand, he cut the hook free from the line and proceeded to cycle home with his new body piercing hanging between his legs.

Back at his house he lowered himself into his car and drove the final stretch to the hospital emergency room.

“The doctor couldn’t hide the grin from his face,” the man told the AA.

Luckily though the medic was able to remove the hook from his genitals and treat the wound. The result was nothing more serious than a swimming and shower ban for a week.

But the fisherman reportedly expressed little sympathy for the swimmer’s plight.

“He told me it’s not an official swimming lake and that it’s his right to fish here and there are signs up to prove it,” the swimmer said.

He explained that he hadn't seen the signs, but added: “From now on I’ll swim a bit further into the middle.”