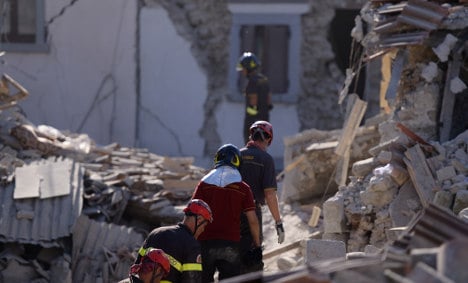 Italy's civil protection agency revised the toll down after the prefecture in Ascoli said the number of confirmed deaths in Arquata del Tronto was 46 and not 57.

Meanwhile, the toll in Amatrice and Accumoli was raised from 190 to 195.

Weeping in a campsite erected to house the homeless from a string of mountain villages, Rita Rosine, 63, said her 75-year-old sister was trapped under the ruins of a collapsed house, presumed dead.

“The situation is worse than in war. It's awful, awful … they say it will take two days to dig her out because they have to shore up the surrounding buildings.

“She didn't deserve to die like that, she was so good.”

As rescuers sifted through the rubble, questions mounted as to why there had been so many deaths in a thinly-populated area so soon after a 2009 earthquake in the nearby city of L'Aquila left 300 people dead.

That disaster, just 50 kilometres (30 miles) south, underscored the region's vulnerability to seismic events – but preparations for a fresh quake have been exposed as limited at best.

Giuseppe Saieva, the chief public prosecutor for most of the area affected, said he would be opening an investigation into whether anyone could be held responsible for the disaster.

In Amatrice a 4.3 magnitude aftershock shook the already badly damaged village on Thursday, fueling fears of fresh collapses which could hamper the rescue operation.

Mayor Sergio Pirozzi said over 200 people had died in the village alone, suggesting the total number of victims could increase significantly.

Amatrice normally has a population of around 2,500 but it was packed with visitors when the quake struck as people slept in the early hours of Wednesday.

The fate of 28 of 32 guests staying in the village's Hotel Roma was still unclear.

The Red Cross began shipping in food and water supplies for homeless residents.

Among those who came to pick up emergency provisions were Maria Atrimala, 48, and her 15-year-old daughter.

“We escaped by pure luck, the stairs of the house held and we ran, blindly in the dark and dust,” she said with tears rolling down her face.

“When we got out we could hear the cries of people still trapped and we helped those we could.

“We were in L'Aquila when the earthquake struck there, and now this. We have friends, relatives that didn't make it. What the future holds I don't know.”

'Nothing left to lose'

Mario, a father of two small boys, said he was still in shock. “We slept in the car last night, though with the quakes it was hard to sleep at all,” he told AFP between sips of Coke.

“We've booked a tent for tonight. But then tomorrow, the next day?”

The extensive damage to lightly-used properties has raised the spectre of some of the smaller hamlets in the region becoming ghost towns.

“If we don't get help, l'Arquata is finished,” said Aleandro Petrucci, the mayor of Arquata del Tronto, which accounted for 57 of the confirmed deaths to date.

Petrucci said it was impossible to say exactly how many people were in the 13 tiny communities that make up l'Arquata when the disaster struck.

In Pescara del Tronto, which was virtually razed by the quake, there are only four permanently resident families but there could have been up to 300 people there on Wednesday.

Measuring 6.0-6.2 magnitude, the quake's epicentre was near Amatrice and its shallow depth of four kilometres (2.5 miles) exacerbated its impact.

It occurred without warning but in an area with a long history of killer quakes.

The Civil Protection agency which is coordinating the rescue effort said that in addition to the dead, 264 people had suffered injuries serious enough to be hospitalised. Several of them are in a critical state.

Rescue workers were pessimistic about the chance of finding any more survivors although the last survivor in L'Aquila was rescued after 72 hours under rubble.

Prime Minister Matteo Renzi vowed lessons from L'Aquila, which still bears the scars of 2009, would be applied. “The objective is to rebuild and start again,” he said.

After L'Aquila, the Civil Protection agency made almost one billion euros available for upgrading buildings in seismically-vulnerable areas.

But the take-up of grants has been low – because of form-filling attached, critics say.

“Here in the middle of a seismic zone, nothing has ever been done,” said Dario Nanni of the Italian Council of Architects.

“It does not cost that much more when renovating a building to make it comply with earthquake standards. But less than 20 percent of buildings do.”

Nanni said the quake's impact had been increased by the widespread use of cement rather than wood beams. “These indestructible beams hit walls like a hammer and that is what made so many (houses) collapse.”