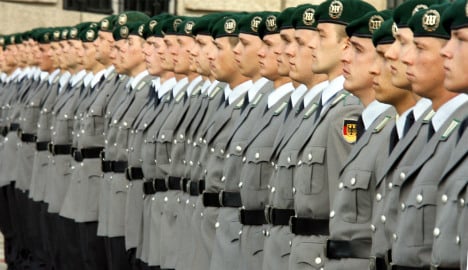 In a sub-section of the paper, civilian “support of the army” is mentioned as an option in a situation where Germany would have to defend its external borders as part of a NATO mission.

The confidential draft of the paper is set to be adopted by the government on Wednesday and has been seen by DPA.

In the section on armed forces, under the heading “Post” the paper states: “the quick and safe delivery of messages with special importance to the German army (for example decisions concerning the reintroduction of conscription) will be carried out according to the terms of the telecommunications security law.”

The paper goes as far as to discuss accommodation that would be necessary in the case of the reintroduction of conscription.

In this case “it will become necessary for civilians to support the military in organization and meeting infrastructural needs” – in other words civilian companies would be compelled to take part in the building of barracks.

Conscription was abolished on July 1st 2011, 55 years after it first came into effect, because the government saw no further military need for it. But the duty of service is still established in the constitution, meaning a simple change of the law is all it would take to reintroduce conscription.

But as recently as the end of June, Defence Minister Ursula von der Leyen said that despite increased tensions in eastern Europe and the ongoing conflict with terror group Isis, she saw no reason for the reintroduction of compulsory service.

The new civil defence paper, the first since the end of the Cold War, sets out the ways in which civilians would be obliged to support the armed forces in their defence needs.

The paper also mentions civilians helping soldiers in tasks such as the provision of fuel. Additionally, civilians could be expected to provide vehicles to the army, or even to yield the use of roadways when armed forces are coming through.

In another section of the paper, the authors write that if soldiers can no longer meet their nutritional needs via the free market, the government will step in to limit the access to food – in other words, rationing.

Opposition party Die Linke (Left Party) have already criticized a leaked version of the document as a form of scaremongering, after it also states that civilians should be encouraged to stockpile food for ten days, and water for five.