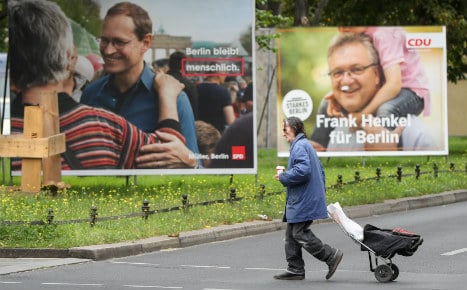 “My Moroccan dealer has his entire life financed by the state. Something in Germany stinks – and that’s why I’m voting for the Alternative,” reads the text beside a bearded young man wearing a friendship bracelet.

AFD poster: “My Moroccan dealer gets his life paid for by the state”. From @exberlinermag https://t.co/ui4NypIFko pic.twitter.com/BU1lFHvwQd

This is the pitch of the far-right Alternative for Germany (AfD), who seemingly think they have a chance of persuading stoner students who get their lives paid for by the state that they are incredibly hard done by.

In state elections coming up in Mecklenburg-Western Pomerania the AfD also have an absolute gem of a poster.

Candidate Petra Federau scores herself for courage, backbone, contact with normal people and humanity. In each category she gets a top score. Her conclusion: “absolutely electable.”

The NPD are in their own words not a national socialist party but a “social homeland party.”

When they have posters which proclaim “Germany for the Germans. Turkey for the Turks” you might justifiably ask what the difference is.

But the NPD do have one ace up their sleeve who might make you see things differently.

Jan Sturm, who is standing for election in the district of Neukölln, has the angelic face and the haircut of a 1980s footballer who found Jesus. And he’s got a dangerous side to him too, as his extensive Facebook photo album of himself caressing motorbikes and guitars demonstrates.

Merkel’s Christian Democratic Union seem to have very little idea what exactly their pitch to the public should be.

Their main poster is simply a picture of Spitzenkandidat (lead candidate) Frank Henkel with a child on his shoulders accompanied by the text; “Frank Henkel for Berlin.”

And if that didn’t convince you, they’ve followed up with a poster of a hippo playing with its child with the slogan “more time for family.”

One can only imagine they've taken a leaf out of the book of the Kanzlerin who has mastered the political art of 'less is more.'

With a poster proclaiming “Berliner speed – take in more snorts”, at first glance Die Linke (the Left Party) seem to be trying to steal the Green Party’s famously liberal attitude towards illegal drugs.

But look more closely and you’ll realise the photo in the background is of a sign for a delayed train. Yes, they’ve pulled a funny. Zug doesn’t just mean a snort – it is also the word for train. They are actually appealing for more transport to be put on the tracks.

Comic party calling for Nazis to be hung

Die Partei, a satirical party which often proclaims that it stands for anything as long as that’s what you want, has pushed the bounds of good taste to the extreme with its poster campaign.

The text emblazoned on a poster hung on a lamppost reads “a Nazi could also hang here.”