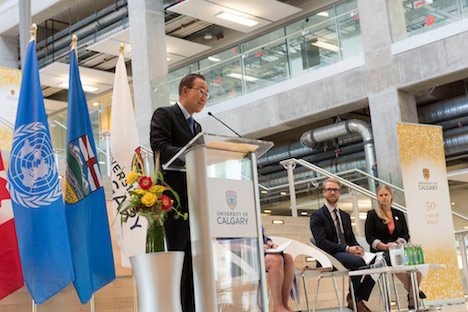 In a meeting at the University of Calgary in Canada on Friday, Ban accounted new steps to advance peace, promote employment and tackle poverty. He said: “Young people are directly affected by the tragic contradictions that prevail today: between abject poverty and ostentatious wealth, gnawing hunger and shameful food waste, rich natural resources and polluting industries.”

With these things in mind, he announced the formation of an Advisory Group of Experts for the Progress Study on Youth, Peace and Security, as mandated by UN Security Council resolution 2250 (2015), the first such measure to recognize the important and positive role young women and men play in the maintenance and promotion of international peace and security.

By that historic text, the Council requested Mr. Ban to “to carry out a progress study on the youth's positive contribution to peace processes and conflict resolution, in order to recommend effective responses at local, national, regional and international levels.”

The findings and recommendations of the study will be presented to the Council in December 2017, on the second anniversary of the adoption of the resolution.

Austria's former Chancellor was announced as Special Envoy for Youth Employment. With more than 70 million youths unemployed worldwide, the new official will aim to help tackle the challenge posed by the fact that young people have all the skills and energy needed to contribute to society – but they lack opportunities for decent work.

He was succeeded by new Chancellor Christian Kern.