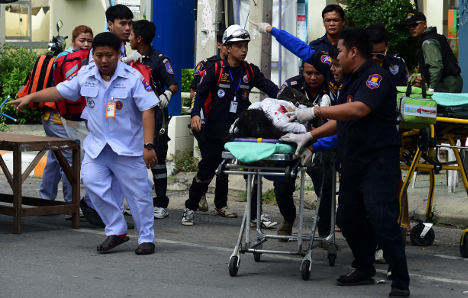 The Italians were caught up in the attacks in Hua Hin, a resort town about 200km from Bangkok where four bombs exploded.

There were also several blasts in the popular tourist island of Phuket as well as in Surat Thani, Trang and Phang Nga. The attacks took place within 24-hours on Thursday and Friday.

The Italians were named by Ansa as Lorenzo Minuti, 21, who was treated for minor injuries, and Andrea Tazzioli, 51.

Tazzioli, from Genoa, told the news agency that he was in the country to celebrate his 51st birthday.

“I was two metres from the bomb,” he said. “Near a woman who died.”

Tazzioli underwent an urgent operation to remove shrapnel from his shoulder and will remain in hospital for a week.

“I was outside, and turned towards the street,” he added. “The bar owner called me inside and in that moment the explosion happened inside.

No group has yet claimed responsibility.