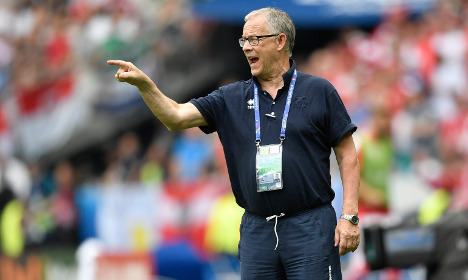 Lagerbäck has been appointed to help and advise Sweden's new coach Janne Andersson, the association said in a statement published on its website on Wednesday. He will step into his new role ahead of Sweden's World Cup qualifier against Holland on September 6th at Friends Arena in Stockholm.

“To learn more about my job, I have spoken to a number of very experienced and talented people, including several current and former national managers. When I talked to 'Lasse' I felt we clicked on issues about values and fundamental views. That's why I wanted to tie him to the national team,” said Andersson.

Lagerbäck coached Sweden to five consecutive international playoffs during his time as assistant manager and manager between 1998-2009, but left following calls for his resignation after the country failed to qualify for the 2010 World Cup.

His coaching career enjoyed a huge international revival this summer when he not only took Iceland to its first ever European Championship in France, but also led the small nation to the quarter-finals.

The 68-year-old had initially hinted he would retire from international football, but said after the tournament that he would keep the door open to offers. On Wednesday he said he looked forward to his Sweden comeback.

“It feels great. I know Janne from before, he's a person I both appreciate and respect. Moreover, it is fun to stay connected to top-level football, but Janne is the one who ultimately controls my assignment, what I should be doing and should not,” said Lagerbäck in a statement.

Andersson takes over the reins of the national team from Erik Hamrén, who announced earlier this year that he would depart after the Euro 2016, in which Sweden failed to make it past the group stage.