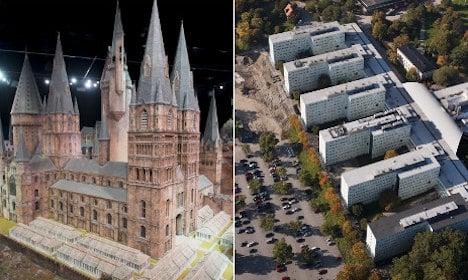 Hogwarts and Stockholm University, but which one is which? Photo: Jonathan Short/AP & Bertil Ericsson/TT

In an effort to find the answer, we picked out seven locations that could in another universe double up for the boy wizard’s haunts and create a very different, very lagom, Scandinavian style world of magic.

You don’t have to be a Harry Potter fan to have heard of platform 9 and 3/4, the spot at London's King's Cross station where young wizards begin their train journey to Hogwarts. The fictional departure point is so iconic that there is even a Harry Potter shop dedicated to it inside the real life station in the British capital.

Unfortunately Sweden isn’t blessed with an abundance of grand train stations, but Hyllie station in southern city Malmö is one that certainly looks unique. For better or for worse we’d wager that the flying-saucer like entrance would leave an impression on young Harry (or should that be Henrik?), and while it can’t quite take you to Hogwarts, it does provide passage to another country thanks to the Öresund rail link with Copenhagen. Harry takes the Hogwarts Express from King's Cross to Hogsmeade in order to reach his magic school, and in the films, the large steam engine is portrayed by the 5972 Olton Hall engine built way back in 1937.

Swedish trains aren’t quite as magnificent, but they can be fairly striking, if sometimes for the wrong reasons. We’re not sure what the thought behind the design of this one which runs between Kalmar and Linköping was, but it is certainly different to say the least. 3. Stockholm University as Hogwarts School of Witchcraft and Wizardry

Much of the action in the earlier Harry Potter books takes place at Hogwarts, where the eponymous hero learns his craft as a wizard. An age-old institution with a scale that creates inspiration and awe in equal measures, in the movies, many of the exterior shots of the school were filmed at Alnwick Castle in England.

Founded in 1878, Stockholm University also has age and prestige on its side, but we have a feeling that Harry may have been less amazed by the blocky, no-nonsense architecture of the Swedish institution. Looking more like a hospital than an ancient university, the functionality of the campus is very Swedish, and not particularly magical. Stockholm University in all its splendour. Photo: Bertil Ericsson/TT

Hogwarts' library is said to contain tens of thousands of magic books on thousands of shelves, and in the Harry Potter films the Bodleian Library at Oxford University, with its rows of wooden shelves and high ceilings, does a good job of doubling as the historic well of knowledge.

Harry may have found a trip to Norrköping’s City Library (Stadsbibliotek) to be something less of a visual pleasure. Grey, blocky and seemingly composed almost entirely of concrete, the exterior doesn’t do much to get the creative juices flowing. The interior is better, but not much. Forget the magnificence of Oxford, this Hogwarts Library would be no-nonsense to say the least.

The magic of concrete in Norrköping. Photo: Creative Commons/Katy AM

The highest point of Hogwarts Castle is the Astronomy Tower, where students are taught how to gaze at the stars by aptly-named astronomy professor Aurora Sinistra. It also happened to be the site of a major battle in the books and the location of the death of one of the series’ most-beloved characters, though we'll leave that detail out for anyone who has yet to read it.

At Sweden's Esrange Space Centre in Kiruna, catching your death of cold (at least in winter) is more likely than death by magic, though the investigation of the aurora borealis at the site does provide a tenuous link to Harry’s old astronomy teacher. Sitting 1,200km north of Stockholm, travelling to the site from the Swedish capital makes the journey up the steps of Hogwarts' Astronomy Tower look like nothing. Isolated Kiruna is an ideal location for investigating the stars. Photo: Fredrik Sanberg/TT

6. The Quidditch World Cup at the Friends Arena

In the magic world, the Quidditch World Cup is the biggest sporting event around, where different teams fly around on their broomsticks attempting to score goals in mid-air by throwing a variety of balls.

Zlatan Ibrahimovic has scored a couple of goals in mid-air at the Friends Arena, where the Quidditch competition would likely be held if it came to Sweden. The swanky 50,000-seater stadium opened in 2012 and is top of the range, but unfortunately, it has also been criticized for providing poor acoustics.

Harry may find it lacks the kind of atmosphere he would hope for at a Quidditch World Cup therefore. He may also find the queue for the train home to be a nightmare, though with a flying broomstick that should be less of a problem. The Friends Arena has yet to host a Quidditch World Cup. Photo: Pontus Lundahl/TT

7. The prisoner of Långholmen

The plot of the third book of the Harry Potter series involves the investigation into the escape of Sirius Black from the Azkaban prison, an island stronghold located somewhere in the middle of the North Sea where wizards who violate the laws of the wizarding world are sent.

Stockholm has its very own island prison on Långholmen, though after closing in the 1970s it now houses a museum and youth hostel. Something tells us that plenty more inmates would have sprung their cells if dodgy wizards were sent to the Swedish version: far from being bordered by the violent North Sea, the Stockholm prison is only a short swim over a gentle canal away from one of the city's biggest islands, Södermalm. That would have made for a short book. The canal that once separated Långholmen's prisoners from Södermalm. Photo: Christine Olsson/TT

PARTNER CONTENT
Summer in Stockholm: Find your very own ‘smultronställe’

STOCKHOLM
10 hacks that make life in Stockholm much easier
Url copied to clipboard!