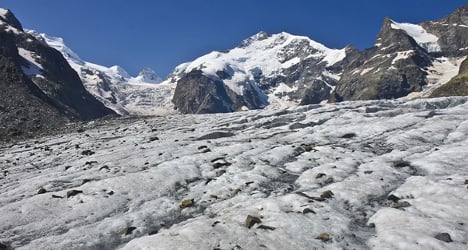 The remains were discovered on the Morteratsch glacier in the canton of Graubünden over the past two summers.

After DNA analysis by forensic experts in St Gallen, the body parts were confirmed as belonging to the missing German, Graubünden cantonal police said in a statement.

Aged 36 at the time, the man was last seen on August 30th 1963 after leaving the Boval hut to ski to the Marco e Rosa hut.

His remains were discovered by other mountaineers and recovered by specialists.

According to police, over 40 people are still missing in the Bernina region.

If you should find remains, police advise not to touch the body, to photograph it, mark it with a reference, note your coordinates and report them to police.

Hikers should only take the object with them should there be an immediate threat to it or if it is unlikely the location can be found again.

In recent years the remains of a number of long-lost climbers and skiers have been found in Switzerland as alpine glaciers melt and reveal their victims.

Last summer the remains of two Japanese climbers who went missing in 1970 were found at the foot of the Matterhorn.

And in 2014 the body of a Czech hiker who went missing in 1974 was recovered in the Bernese alps.