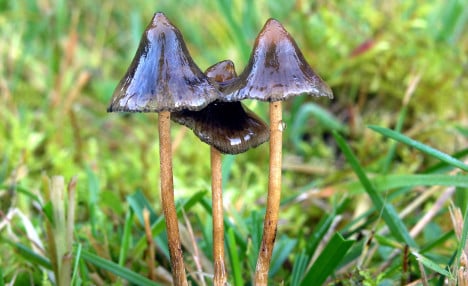 He then fed some of the fungi to his 12-year-old daughter who fell into a comatose state, police report.

The girl's grandmother, to whom the house belongs, found her unconscious and unresponsive. She called an ambulance, which arrived on the scene and took her granddaughter to hospital, where she had to stay.

She recovered quickly and has since been released from hospital.

Paramedics told police that the girl's father, still intoxicated from the mushrooms, denied having any hand in causing her to become unconscious.

It is difficult to discern how much psilocybin a mushroom contains, which means that overdoses are likely.

Police also say that repeated use of psychedelics can hugely increase tolerance, so a user will take more and more each time to achieve the same high while the side effects get worse and worse.

A drugs unit later searched the Munich house and found an assortment of psychoactive substances, such as bath salts, along with packaging materials, micro scales, and empty bags used for storing drugs.

With this evidence, police have assumed that the man is a dealer of bath salts, a synthetic drug which contains a variety of stimulants.

He has been brought before a judge and will now stand trial for the charge of providing a minor with illegal intoxicants.