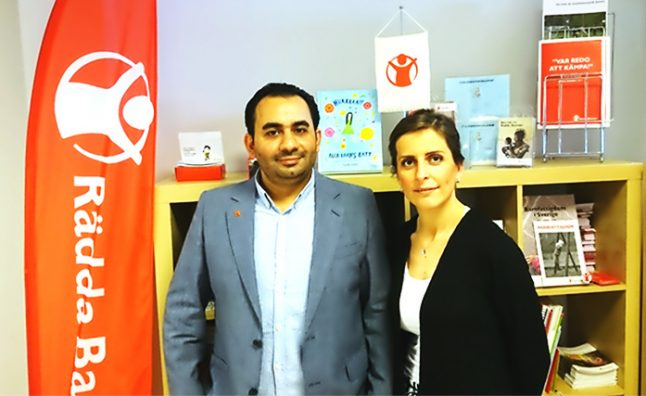 “The first day I arrived, I met people with great skills and abilities. I recognized my English language professor there, a famous Syrian athlete, and many others from almost every walk of life,” says Adnan, remembering his arrival at the Restad gård asylum centre, the biggest camp in Sweden, with more than 1,500 residents.

“About 50 percent of the refugees had a higher education.”

But Adnan noticed something concerning. “I found that all these people were wasting their time with nothing to do, waiting for a few elderly Swedish volunteers to have coffee and mingle together,” he says.

“People were surrendering to desperation, depression and stress.”

His idea was simple: “Rather than waiting for initiatives and volunteers, we could use our skills and organize ourselves while we wait to get our asylum decisions. Most people are looking forward to contributing to building their new community… and their own lives.”

Adnan had left Syria in 2013, along with his wife, who he had met while working as a computer engineer in China. This was also where he had developed a passion for scuba diving, becoming a ‘master scuba driving trainer’  and training future trainers.

His work brought him back to Syria to found the country’s first scuba diving academy – previously, scuba diving had been restricted to military operations.

But after a year working on the Latakia coastline, the Syrian war began, and the academy was ordered to halt its activities. After two years, the family decided to leave.

“Things weren’t getting any better. We couldn’t stay in Syria anymore,” says Adnan.

At the centre, the support group grew quickly; in less than two months, its schedule included three daily activities, ranging from a book club to first aid sessions to music classes. After five months they counted 12 clubs in total, run by 365 refugee volunteers.

The next step was gaining recognition from Swedish authorities. “At the beginning they looked at us with some suspicion,” says Adnan. ” They were used to organizing things and handing out money and food to the ‘poor refugees’.”

Adnan told organizations that wanted to help: “You don’t need to babysit the refugees. They are victims, yes, but they are not helpless. Let them build their own lives. They have survived a horrible war and terrible journeys to get to Europe. They are strong!”

To show the public and authorities what the project was all about, the group organized a cultural show in March 2015. Called ‘Alla under samma sol’ (all under the same sun), it included dancing, singing and acting, with the performers trained by professionals who had experience in Syria.

His opening statement for the shows was always the same: “We appreciate your warm welcome and we understand your concern. We understand that most of what you know about us, you got from the media. We want to tell you that we come from a very old and colourful culture, a great one.”

Adnan remembers the reaction of locals who came to the show. “Swedes admitted that they had 'had lots of misconceptions about refugees'. Many people think that refugees are scroungers, not people driven out of their homes by a hellish war.”

A week after the show, the group had received more than 200 emails asking them to perform again, this time at the opera, and inviting the group to other cities.

People weren't just keen to listen to the refugees, they wanted to get involved. The number of Swedish volunteers each day rose from under five to 60, and the group was invited to debates on integration, while the local municipality offered facilities.

“We felt like we became part of the community, the Swedish cultural fabric,” says Adnan.

In 2015, the support group organized 901 activities and 16,338 direct refugee-to-refugee services. They have met with political party leaders and even received visits from the Swedish king.

As well as self-empowerment of refugees, the group's other aim was networking, in order to set up work opportunities for the refugees. Around 40 internships and 30-40 work placements were arranged – even before the refugees had received Swedish personal numbers – with the group organizing paperwork including criminal records checks for those working with children.

In October 2015, Adnan started working with Save the Children to replicate the support group in other asylum centres across Sweden – which he describes as “the best thing that’s happened”.

Working with two colleagues from the charity, Lume and George, Adnan learned how international humanitarian organizations work, and now has easy access to channels and resources to help the group expand easily and efficiently.

His colleague, Lume, says that by using Save the Children's network of volunteers in many Swedish cities, they hope to “create a sustainable structure, which could shift the mindset towards refugees. It forces everyone to change and rethink the power structure – creating these networks and cooperating.”

At the moment, new support groups are being set up in asylum centres in Götene, Alingsås, Laholm and Umeå

Adnan is pleased with what he's achieved. “There’s a need for what we are doing; helping people fill their times with activities until they get the chance to continue their lives outside the camps. It’s critical not to build an angry person in the centre, because they will end up living in your city and become your neighbour – we need to help them. “