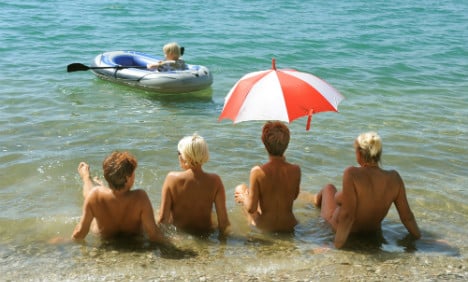 To the shame of the Bundesrepublik, the people of Austria are now more likely to have no qualms about stripping down to their birthday suits on the beach.

While a quarter of all Germans have felt the sea breeze tickle their private parts, one in every three Austrians have at some time in their life enjoyed the same pleasure, a survey by travel company Expedia showed.

On the whole, though, Germans are still very much cool with the idea of people stripping off around them.

A total of 72 percent of respondents said it is “absolutely acceptable” to be naked or partially naked on the beach, while 61 percent of Germans are more than happy with the idea of a woman sunbathing topless next to the them, the survey showed.

That is significantly more than the 54 percent of Germans who think Speedos are acceptable beach wear. (On the important question of the thong, opinion was divided. Only a quarter of men see it as a suitable part of a lady’s beach clothing, while 62 percent of women view it as perfect for sunny days by the sea.)

Still, only a small proportion of Germans said they actually regularly take off all their clothes in the sun.

While 7 percent of German men admitted their favoured swim attire was no attire at all, only 2 percent of women said they normally relax on the beach bare-chested.

In fact, many Germans revealed themselves to be much more coy than commonly assumed.

One quarter of women said they prefer to wear a dress in addition to their swimming outfit to ensure that they don’t reveal too much skin.

Similarly, a fifth of all men said they prefer to wear a T-shirt in addition to their swimming shorts.

Just over 500 Germans took part in the online survey of over 11,000 adults from 24 countries, including the USA, Brasil, UK, Australia, Spain, France and Italy.

It revealed that Italians are the most prudish of all, with 71 percent saying that they would not feel comfortable sitting next to naked sunbathers.

COVID-19
‘I’m going crazy’: Why international residents in Europe will travel this summer despite Covid

TRAVEL
SURVEY: Are you planning to travel abroad this summer despite the pandemic?
Url copied to clipboard!