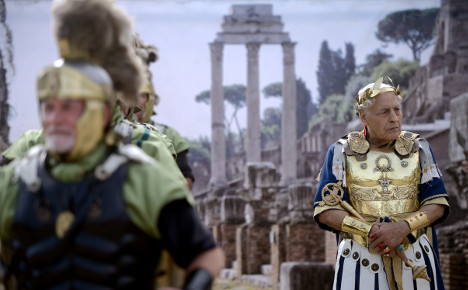 A man dressed as Julius Caesare takes part in an event to mark the anniversary of the legendary foundation of the Eternal City in 753 BC, on April 19th, 2015. Photo: Filippo Monteforte/AFP

The centre of ancient Rome, the Forum, the Circus Maximus and the walls, aqueducts and sewage system of what was once the most powerful city on Earth have all been earmarked as needing help ranging from a relatively minor spruce-up to full-blown structural works.

Saddled with debts of some €12 billion ($13 billion), Rome cannot afford to do it on its own.

But City Cultural Superintendent Claudio Parisi Presicce told a press conference that he believed the city could call in some of the reserves of goodwill given Rome's central role in the construction of Western civilization.

“We need new strategic ideas. We have to create a link between the people living above the modern city and the ancient city that lies beneath them,” he said.

Still reeling from a scandal which revealed widespread corruption in the city administration, Rome officials may struggle to convince city residents to put their hands in their pockets for the proposed makeover, admitted Francesco Paolo Tronca, the government-appointed official who has been running the city since the end of last year.

“We need help to ensure Rome continues to be a reference point in terms of beauty for the whole world,” said Tronca, who was brought in after the former mayor Ignazio Marino quit over a minor expenses row unrelated to the broader corruption scandal.

The appeal by Tronca, whose role is coming to an end with the approach of fresh mayoral elections, follows a series of successful initiatives which have seen top luxury brands finance prestigious renovation projects in the city.

Fashion house Fendi bankrolled the cleaning of the Trevi fountain, posh jeweller Bulgari is in the process of making the Spanish Steps pristine once more and shoemaker/fashion group Tod's is behind a soon-to-be-finished renovation of the Colosseum.

In the wake of those projects, the city has drawn up a new 'to-do' list which it has costed at nearly €500 million.

Projects include carrying out new excavations under the Forum and restoring the gladiators' school that once trained up the legendary fighters to do battle before emperors and ordinary citizens in the nearby Colosseum.

An investor willing to put up €10 million will be offered the opportunity to claim the credit for restoring 80 fountains and a more modest €600,000 would allow the authorities to repair the aqueduct that supplies the Trevi fountain.

Among the most ambitious projects is a plan to create a walkway around what remains of the city's Aurelian walls, built in the third century AD and in bad repair in parts. That comes with a nine million euro price tag.

Tronca also presented a list of maintenance tasks which offer lovers of the Eternal City to contribute to its renewal for as little as €300 – the price of weeding required at the remains of an ancient market situated around Trajan's column.