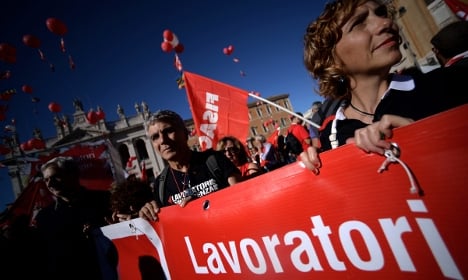 Some 2.2 million Italian families are without an income from employment. Photo: AFP

The number of families without a job income rose from 9.4 percent in 2004 to 14.2 percent last year, corresponding to 2.2 million households, Istat said in its report on the “economic situation of the country” for 2016.

The rise peaked at 24.5 percent in the impoverished southern regions. In the wealthier north, the figure stood at 8.2 percent and 11.5 percent in Italy’s central regions.

“The effects of the crisis on the working conditions of families are remarkable,” Istat said in the report.

Younger families are the worst off, with unemployment going from 6.7 percent in 2004 to 13 percent last year.

Meanwhile, Italy’s social security system is “among the least efficient” in Europe, second only to Greece.