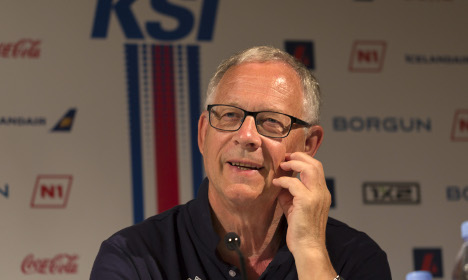 The tiny nation of only 323,000 people pulled off a footballing miracle on Monday night when they eliminated England from Euro 2016, sealing their place in the quarter-finals with a 2-1 win at the Allianz Riviera stadium in Nice, France.

The key architect was a fittingly humble coach. Sixty-seven-year-old Lars Lagerbäck learned much of his craft from English managers like Bobby Houghton and Roy Hodgson, who were influential in Sweden during the 1970s and 80s.

On Monday he used that knowledge to eliminate Hodgson's team from France 2016, forcing the now former England manager’s resignation, after the Three Lions crashed out to their island opponents.

“A part of why I am sitting here now is thanks to Houghton (who coached Malmö in the 1979 European Cup final) and Hodgson when they came to Sweden, so I’d like to express my big respect to them,” Lagerbäck said after Iceland’s 2-1 win.

“I learned a lot from them. They changed the training methods in Sweden and the coaching and education in the long run, and I really benefited from that.”

Iceland fell behind in the fourth minute in Nice when Wayne Rooney converted a penalty for England, but Ragnar Sigurdsson quickly equalized, before Kolbeinn Sigthorsson score what proved to be the winner in the 18th minute.

The quick-fire reply from the underdogs was a further reminder of the talents of their Swedish coach, who once said that he “knows” international football, in what now reads very much like an understatement.

Before starting his current position in 2011, the manager took his native Sweden to five major finals and coached Nigeria at the 2010 World Cup. Until this month, his biggest achievement was arguably that of securing Euro 2016 qualification for Iceland, but with the islanders now looking forward to a fairytale quarter-final against hosts France at the Stade de France on Sunday, that feat has been surpassed.

Officially he is the joint coach, sharing the duties with his former assistant Heimir Hallgrímsson, who is set to take over after the finals in France, hoping to reap the benefits of the job done by the veteran Lagerbäck since 2011.

Leaning on a group of players who took Iceland to the European under-21 Championship for the very first time in 2011, Lagerbäck took the country to the brink of a place at the 2014 World Cup in Brazil.

After missing out only in a play-off against Croatia, Iceland went one better to qualify automatically for the Euros, beating the Netherlands home and away in the process.

Little wonder Lagerbäck has hero status in the country and was described by Visir newspaper as “a liberator of the volcanic island”.

“I wouldn't say that I am a hero. Martin Luther King, Nelson Mandela and people like that are real heroes,” retorted Lagerbäck.

Lagerbäck and his replacement as Sweden coach, Erik Hamrén, during a friendly. Photo: Leif R Jansson/TT

A former lower league player in his homeland, Lagerbäck has always been understated and never wanted a high profile. He had spells coaching Sweden's under-21 and B teams and then worked as assistant to Tommy Söderberg for two years before stepping up to become joint coach.

The pair took Sweden to Euro 2000, the 2002 World Cup and the quarter-finals of Euro 2004 before Söderberg stepped aside.

On his own, Lagerbäck coached his country to the 2006 World Cup and Euro 2008, but stepped down after they missed out on the 2010 World Cup.

He still went to the finals in South Africa as coach of Nigeria, but left after they collected just one point from three group games.

After speaking to the Welsh FA about becoming their first non-British coach, he took what seemed a surprising decision to move to Iceland.

“I would like to think I proved myself a competent coach during a decade in charge of Sweden,” he once told World Soccer in an interview. “I led them to five consecutive World Cups and European Championships and I've a name for team building, for making the most of the personnel at my disposal. I know international football.”

When Lagerbäck took over at Iceland, they were ranked lower than Liechtenstein. They are now 34th in the world, one place above his native Sweden, and his success has not gone unnoticed at home.

After Iceland secured their Euro place, a poll in Swedish tabloid Aftonbladet showed that 93.8 percent of readers would rather have had him in charge than Erik Hamrén.

Lagerbäck, who talks to his team in English, has been blessed with an unusually talented group of players including Gylfi Sigurdsson of Swansea City, Alfred Finnbogason of Augsburg and Kolbeinn Sigthorsson of Nantes. But he also knows exactly what he is doing after starting out in coaching back in 1977.

“If you look at all the good teams, from Spain to Barcelona and other teams who have won tournaments, whether it is international or club football, there is always a very clear idea of how to play football,” he told The Guardian in 2013.

“And if you can't adhere to that, then it is very difficult to achieve anything.”

Despite his clear expertise, any team hoping to sign up the man who has sent shockwaves through the footballing world this summer will be disappointed: Lagerbäck has promised to retire after Euro 2016.

“The world is so tired of me already that I have to stop. I look forward to sitting in the stands and pointing out what everyone is doing wrong,” he joked to Icelandic paper Morgunbladid following the win over England.

He'll certainly go out on a high.