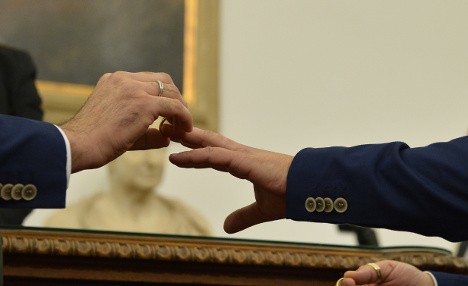 Italy has passed a landmark gay civil unions bill. But it's not what everybody was hoping for. Photo: AFP

While the bill is cause for celebration for those who have spent decades fighting for Italy to recognize same sex relationships, many LGBT groups say the new laws don't go far enough.

“I don't think the bill can be called a triumph, but it can't be seen as a failure,” Professor Roberto Virzo, who teaches international law at the Universities of Sannio and Luiss, told The Local.

“Nonetheless, it is a historic step forward.”

Italy's continual refusal to grant same sex couples legal recognition had left many feeling the country was out of step with the rest of the West. Indeed, last June the European Court of Human Rights ruled Italy was infringing upon human rights in failing to acknowledge gay unions.

As the historic bill cleared Italy's lower house after a lengthy legislative journey many took to social media to share the news with the hashtags #lovewins or #amorehavinto.

But not everyone saw it as a victory. Here's why the bill is not everything Italy had hoped for.

It has no adoption clause

A clause allowing gay couples to adopt their partners' biological children automatically was scrapped from an earlier draft of the bill amid huge controversy earlier this year.

Critics of the the bill, like Italy's Interior Minister, Angelino Alfano – who argued against the bill altogether – suggested that stepchild adoption laws would open the door to surrogacy – which is still illegal in Italy.

Although Wednesday's bill does not forbid adoption, rulings will be made by judges on a case-by-case basis.

The very fact that same sex couples still need to go through the courts to gain parental responsibility means that for many, the bill is not so much a victory for gay rights as a failure for family rights.

“Italy now needs to extend these rights to gay families and fill the legislative gap the bill has created,” Virzo added.

It makes no references to fidelity

In its definition of what constitutes a civil union, the bill refers to “moral and material support and cohabitation”, just like marriage.

But one key aspect is missing.

The references to fidelity or faithfulness were removed from the bill, provoking outcry among the LGBT community.

Many saw it as a refusal to acknowledge same sex romantic relationships as equal to heterosexual ones.

It took the government to the brink

This bill was a big test for Renzi's cabinet and one it failed to pass with flying colours.

Although he claimed the bill had been a huge success, it was a headache for his cabinet from the start.

In order to pass the bill the government was forced to resort to underhand tactics: calling two confidence motions to push it through.

The bill was heavily watered down amid clashes over the 'stepchild adoption' clause.

During political skirmishes Renzi clashed with his own interior minister, and his Democratic Party was betrayed in February by the populist Five Star Movement, who withdrew their support for civil unions overnight in a bid to win support from centre-right voters.

In helping centre-right parties drum up opposition to the bill through initiatives like 'Family Day'  – a mass rally in favour of 'traditional'  family values held in Rome –  the Catholic Church showed it is still able to exert considerable influence over Italian politics.

Not only did staunch opposition change the content of the bill, it also revealed Renzi was unable to unite different political factions.

Only 15 counries worldwide perform gay marriages, with many preferring to keep the institution of marriage and same-sex civil unions symbolically separate.

Given the prominent role of the Catholic Church in Italy, pushing for legalization of gay marriage is likely to be very difficult.

While the vote is a quantum leap forward for Italy, failure to grant the same legal status to heterosexual and homosexual couples is still seen by many as a form of discrimination. It also leaves Italy behind neighbours France and Spain, also historically Catholic countries.

Renzi may have been quick to declare #lovewins, but many say it is a hollow victory. Others argue that many countries that have enacted partnerships have quickly moved towards full marriage equality.

Italy has now a civil partnership law, finally! It's just a step toward the same-sex marriage law, but it is fundamental! #unionicivili