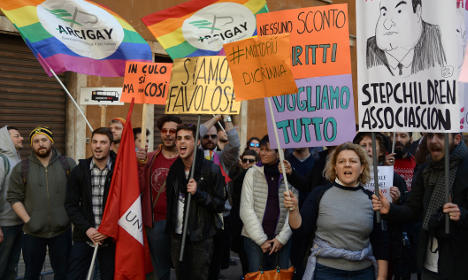 Prime Minister Matteo Renzi called the vote, which begins at 2:10 pm (1210 GMT) in the lower house, to force the controversial bill through, putting his cabinet on the line in a challenge to the Catholic right and rebels in his own party.

Italy is the last major Western country not to allow gay couples legal status, but after years of thwarted efforts the draft law is expected to pass. If the government survives the ballot, the bill itself will be voted in later on Wednesday or Thursday.

On Facebook, Renzi called Wednesday “a day of celebration”.

The government survived a confidence vote on the bill in the upper house in February after fierce  protests from opposition parties and part of Renzi's centre-left Democractic Party (PD) forced the government to water it down considerably.

“For Italian homosexuals and all those who support civil rights, it's a bittersweet victory,” said Claudio Rossi Marcelli, a commentator for the Internazionale magazine who lives with his husband and children in Denmark.

A draft article that would have allowed gay couples to adopt their partners' biological children was discarded. While adoption will not be ruled out entirely, judges will decide on a case-by-case basis.

In the face of concern that civil unions would be too similar to marriage, references to a need for faithfulness were also removed.

Gay couples will be able to take each other's names and inherit each other's residual pension rights, but critics say the new rules fall well short of legal protection offered to same-sex couples in other European countries or the United States.

“The glass is half full,” Gabriele Piazzoni, national secretary of the Arcigay organization, said in a statement.

“The text contains the recognition and protection many gays and lesbians have been waiting for all their lives… (but) everything this law has failed to guarantee leaves a bitter taste.”

Several previous attempts to legalize civil unions in Italy have foundered. In 2007, a vast demonstration forced the centre-left government of Romano Prodi to drop a much less ambitious civil union project — and the failure of the bill was cited as one of the causes behind the fall of his government in early 2008.

The current bill risked running aground over the adoption clause, with critics insisting it would open the door to surrogacy, which is illegal under Italian law.

But with repeated warnings from the European Court of Human Rights slamming the delay, Renzi rushed to find a compromise.

Marilena Grassadonia, head of the Rainbow Families association, blasted the bill as “a monument to the hypocrisy and ineptitude of a political class which, like Pontius Pilate, washes its hands of its responsibilities”.

“This parliament and this government will go down in history not for having passed the first law on gay unions, but for having denied children their family rights,” she said.

The decision to use a confidence vote to push the bill through angered the Roman Catholic Church, with Nunzio Galantino, secretary general of the Italian Bishops' conference, describing it as “a defeat for everyone”.

PARTNER CONTENT
7 out of 10 academics in Sweden are members of a union. Here’s why you should join one, too

RIGHTS
How long can Brits stay in the UK without losing their EU residency?
Url copied to clipboard!