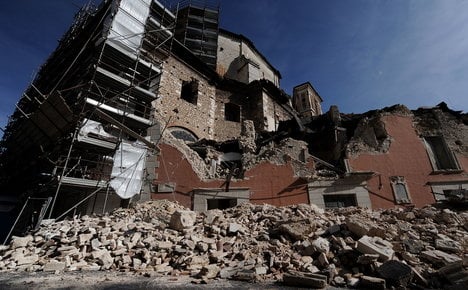 Fabrizio Cimino, was sentenced to three years in jail in February 2014, after a court in L’Aquila ruled he was responsible for the deaths caused during the collapse of a building in the town’s central Via d’Annunzio during the earthquake of April 6th 2009.

Engineer Cimino had overseen the restoration of the building six years prior to the quake and was sentenced on multiple counts of culpable homicide after judges decided he had made ‘clear and critical oversights’ over the building's structural integrity.

At an appeal hearing in September 2015, Cimino had the sentence reduced to one year and ten months – but the sentence was overturned by Italy’s highest court , the Court of Cassation, on Tuesday.

VIDEO: Seven years after the earthquake, what's life like in L'Aquila?

In its ruling, the court said a new trial should be held by a separate appeals court in Perugia, in order to thoroughly evaluate all existing evidence and to decide whether or not the engineer can be held responsible.

“Through our appeals the court has decided a more in-depth analysis is needed,” Cimino’s lawyer, Stefano Rossi, told La Repubblica.

“As long as judges in Perugia don’t view things differently, the trial will soon be over.”

However, it is unlikely that the trial in Perugia will ever get to pass judgement.

The charges against Cimino are subject to a seven year and six month limitation period, which is set to expire this October.

Given the extremely low probability that a verdict will be reached in the new case before next October, the ruling essentially means the engineer is free.

This is not the only case of people being acquitted in cases that brought against everyone from landlords to scientists following the quake which killed 308 people.

Last November, Italy’s top court cleared six scientists who had each been handed controversial jail sentences for failing to properly warn the population over the potential dangers of a quake.

The earthquake, which measured 5.8 on the Richter scale – destroyed much of the town’s city centre, injured more than 15,000 and left 65,000 homeless.