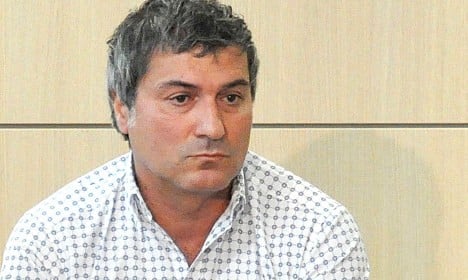 Italian surgeon Paolo Macchiarini has defended himself in an interview with a Swedish magazine. Photo: Lorenzo Galassi/TT/AP

The Italian attained world fame after completing the first synthetic trachea transplant using stem cells in 2011. However six of his eight patients died, while another remains in hospital in the US.

“The complications are not related to the transplant,” Macchiarini told Swedish medical journal Läkartidningen in an article published on Wednesday.

“When you are on the front line you run the risk of being attacked, and we have been, by the so-called whistleblowers. But I hope that everyone in Sweden will consider us innocent before we are convicted of anything,” he argued.

“Those who are criticising should be aware that there are hundreds of articles on large animal studies of transplants using synthetic windpipes.”

KI first filed a complaint alleging that Macchiarini had downplayed the risks of the procedure in 2014 and suspended all synthetic trachea transplants shortly afterwards.

A previous article in Läkartidningen described the Macchiarini case as an “ethical Chernobyl” for the institute.

“His actions have had tragic consequences for the individuals concerned and their families,” said Mats Engelbrektson, the institute's director of human resources after announcing that he had been fired earlier this year.

“His behaviour has damaged the credibility of KI and research in general.”
Story continues below…

Swedish police are investigating Macchiarini on suspicion of gross negligent manslaughter and bodily harm, which could entail up to six years in prison.

However the surgeon told Läkartidningen on Wednesday that he wanted to continue his work and backed the idea of a major clinical trial.

Asked if he accepted that he may have made some mistakes in the past, he said: “I'm not God. We all make mistakes every day”.

“I’m happy that the vaccines we have in stock can be put to use even if the AstraZeneca vaccine has been paused in Norway,” Health Minister Bent Høie said in a statement.

The 216,000 doses, which are currently stored in Norwegian fridges, have to be used before their expiry dates in June and July.

Sweden will receive 200,000 shots and Iceland 16,000 under the expectation they will return the favour at some point.

“If we do resume the use of the AstraZeneca vaccine, we will get the doses back as soon as we ask,” Høie said.

Like neighbouring Denmark, Norway suspended the use of the AstraZeneca jab on March 11 in order to examine rare but potentially severe side effects, including blood clots.

Among the 134,000 AstraZeneca shots administered in Norway before the suspension, five cases of severe thrombosis, including three fatal ones, had been registered among relatively young people in otherwise good health. One other person died of a brain haemorrhage.

On April 15, Norway’s government ignored a recommendation from the Institute of Public Health to drop the AstraZeneca jab for good, saying it wanted more time to decide.

The government has therefore set up a committee of Norwegian and international experts tasked with studying all of the risks linked to the AstraZeneca and Johnson & Johnson vaccines, which is also suspected of causing blood clots.

Both are both based on adenovirus vector technology. Denmark is the only European country to have dropped the AstraZeneca
vaccine from its vaccination campaign, and said on Tuesday it would “lend” 55,000 doses to the neighbouring German state of Schleswig-Holstein.

PARTNER CONTENT
From ABBA to Spotify: the Executive MBA where creative thinking is key
Url copied to clipboard!