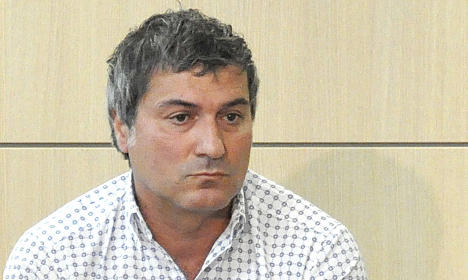 Paolo Macchiarini. Photo: Lorenzo Galassi/TT/AP
Previously an internationally renowned surgery star who operated on numerous Swedish and international celebrities, Paolo Macchiarini was sacked in March by Sweden's Karolinska Institute (KI) after growing controversy surrounding his medical methods.
The Italian attained world fame after completing the first synthetic trachea transplant using stem cells in 2011. However six of his eight patients died, while another remains in hospital in the US.
“The complications are not related to the transplant,” Macchiarini told Swedish medical journal Läkartidningen in an article published on Wednesday.
“When you are on the front line you run the risk of being attacked, and we have been, by the so-called whistleblowers. But I hope that everyone in Sweden will consider us innocent before we are convicted of anything,” he argued.
“Those who are criticising should be aware that there are hundreds of articles on large animal studies of transplants using synthetic windpipes.”
KI first filed a complaint alleging that Macchiarini had downplayed the risks of the procedure in 2014 and suspended all synthetic trachea transplants shortly afterwards.
A previous article in Läkartidningen described the Macchiarini case as an “ethical Chernobyl” for the institute.
“His actions have had tragic consequences for the individuals concerned and their families,” said Mats Engelbrektson, the institute's director of human resources after announcing that he had been fired earlier this year.
“His behaviour has damaged the credibility of KI and research in general.”
Swedish police are investigating Macchiarini on suspicion of gross negligent manslaughter and bodily harm, which could entail up to six years in prison.
However the surgeon told Läkartidningen on Wednesday that he wanted to continue his work and backed the idea of a major clinical trial.
Asked if he accepted that he may have made some mistakes in the past, he said: “I'm not God. We all make mistakes every day”.
Url copied to clipboard!