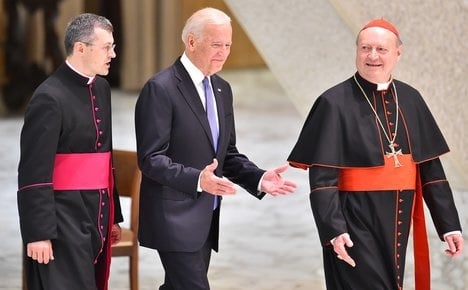 Biden, whose 46-year old son Beau Biden died from brain cancer last year, made an emotional speech at a stem cell summit thanking Francis for his support and for counselling his family during his visit to the United States.

“I wish every grieving parent, brother, sister, mother, father would have the benefit of his words, his prayer, his presence. He provided us with more comfort than even he, I think, will ever understand,” he said before shaking hands with the pontiff.

Francis told the summit it was unacceptable that patients suffering rarer types of cancer or childhood diseases were sidelined “because investing in them is not expected to produce substantial economic returns”.

The US vice president said the cancer battle was as urgent as the fight against infectious diseases.

“Every day thousands of people are dying, millions are desperately looking for hope for another day, another month, another year. One more hug, one more kiss.”

Biden, who recalled the moment in the White House Rose Garden when he told President Barack Obama he would be sacrificing further political ambitions to galvanize cancer research, said he was “calling for an international commitment”.

The focus was on “access and affordability”. “The best treatment must be for everyone, not just the privileged and powerful”.

He unveiled a three-point plan, ranging from prevention to treating cancer as urgently as other diseases and increasing data sharing.

“We need a public and private partnership to make a quantum leap. Our goal is to do in five years what otherwise would take a decade,” Biden said.

The world could expect 20 million new cancer cases by 2025, and 11.4 additional million cancer deaths, he warned.

The international response to cancer “should reflect the same urgency we bring to infectious disease threats. We should be sharing data the moment it is published, immediately, not hiding it behind pay-walls that prevent information from being shared,” he added.

Biden said he had already been contacted by a number of world leaders “who want to collaborate on ending cancer as we know it,” including the heads of Israel, Japan and South Korea.

The April 28th to 30th meeting is co-hosted by the Vatican's Pontifical Council for Culture and US-based Stem for Life Foundation.

Biden, a Catholic, told the scientists, physicians, patients and their families gathered in the tiny state that religion was not only playing a key role in advancing research into adult stem cell therapies but helped white coats remember what they were striving for.

“Standing on the cusp of unprecedented scientific change, unimagined breakthroughs, we cannot forget people are the real reason for what we do. There is always a loved one in pain, sustaining all hope for a cure,” he said.

“Everyone here understands… how faith can turn loss into hope, and hope into action.”

After the speech Biden met Cardinal Pietro Parolin, the Vatican's secretary of state, and was set to hold talks later with Italian Prime Minister Matteo Renzi.

TRAVEL
‘Health pass’: What documents do Americans need for travel to Italy?
Url copied to clipboard!