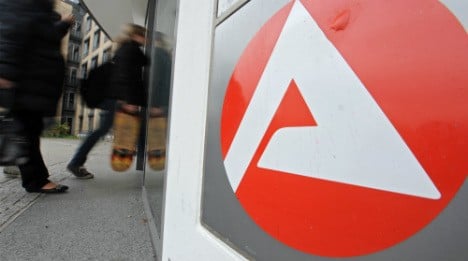 People walking into an employment office in Germany. Photo: DPA

Andrea Nahles, the Labour Minister and member of the centre-left Social Democratic Party (SPD), drafted the bill in reaction to a court ruling late last year which found that EU citizens have a right to welfare payments after living in Germany for 6 months.

Local governments – which are responsible for paying social welfare – were outraged by the ruling, arguing that it would put an unbearable pressure on their finances.

The Labour Minister clearly agreed, with the draft bill in practice taking away from EU citizens the fundamental right to claim welfare payments during their first five years in Germany.

“It can’t be the case that someone only has to move to another EU country to extract full social security benefits, even though they have a functioning social system in their own country,” Nahles recently told the Westdeutsche Allgemeine Zeitung (WAZ).

A spokesman for the Labour Ministry confirmed on Thursday morning that the draft was genuine.

Under the draft law EU citizens would have no entitlement to welfare payments unless they are currently in employment or if they have acquired an entitlement to social security payments by working.

Only after a stay of five years without any government support would EU citizens have an automatic right to claim ‘Hartz IV’, the most basic form of unemployment benefit that exists in Germany.

Hartz IV was introduced in 2003 as a base social welfare payment available to all German citizens, regardless of whether they had ever had a job.

The law proposes that EU citizens who make a claim for welfare benefits would instead be provided with a one-off payment which would cover the basic living costs for a period of four weeks.

Applicants would then be provided with a loan to cover travel costs back to their home country.

The draft law reportedly has the full backing of Chancellor Angela Merkel, making it highly likely that it will pass a vote in the Bundestag (German parliament), given the large majority which the ‘grand coalition' of SPD and Merkel’s Christian Democratic Union (CDU), enjoys.

In February, the European Court of Justice (ECJ) supported initial steps Germany had taken to prevent so-called 'welfare tourism' when it ruled against a Spanish family which appealed against the jobcentre's decision not to provide social security payments to the father immediately after he arrived in the country.