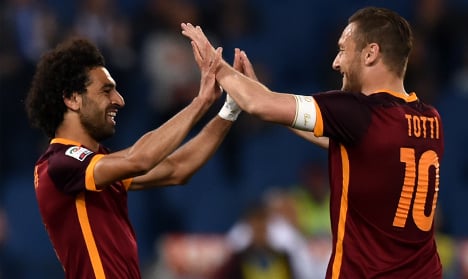 Leaders Juventus will clinch a record-equalling fifth consecutive league crown if Napoli drop points against Roma at the Stadio Olimpico on Monday.

But while it is only a matter of time before Massimiliano Allegri's reigning champions emulate the club's record-setting feat from 1935, the battle for second place is far from over.

Roma cannot catch Juve but are only five points adrift of Napoli, meaning a home win at the Stadio Olimpico would see Spalletti's men close the gap to two points with three games remaining. Spalletti admitted both Juventus and Napoli's campaigns this season have been impressive.

But the 57-year-old Italian said if any of his players needed inspiration, they need look no further than Leicester and their astonishing charge towards the English Premier League title.

“(Claudio) Ranieri's Leicester are doing some great things because they're a team, so are Juventus, and have some great individual players,” Spalletti said on Sunday. “And we should look towards the teams that are better than us.”

Spalletti has spent the past weeks embroiled in a tense stand-off with playmaker Francesco Totti, who is approaching possibly his Serie A swansong in what is his 23rd season with the club, and brushed off questions about the club legend.

With a third consecutive automatic qualification for the Champions League at stake, Spalletti is keen to maintain cohesion in the dressing room, and above all avoid the recent fate of Napoli. The southern club finished third in Serie A in 2014 only to fail to qualify for the Champions League proper after an aggregate defeat to Athletic Bilbao in the play-offs.

“It's a fundamental objective for us and the fans, and should be the only thing we're focusing on,” said Spalletti.

Although he has been inspired by Leicester and Juventus, he added: “In terms of attitude and consistency, Napoli have played the best football in the league this season and it's only right they're in second place. “They're the strongest side behind Juventus.”

Napoli welcome Gonzalo Higuain back from a three-match ban after he lashed out at the referee when sent off in a 3-1 defeat at Udinese three weeks ago.

It severely dented 30-goal Higuain's hopes of breaking the all-time Serie A record of 35 goals in a single, 20-team season, set by AC Milan forward Gunnar Nordahl of Sweden in 1950.

Amid an ongoing boycott of the media, instilled by club president Aurelio De Laurentiis, Maurizio Sarri's men will be looking to do their talking on the pitch.

“Subject to Spain’s right of appeal, the 10-point deduction applied to the Rugby World Cup 2023 qualification table means that Romania will qualify as Europe 2 into Pool B replacing Spain,” read the statement.

Portugal — who Spain beat to seal their place in the global showpiece in France next year — replace Romania in the Final Qualification Tournament taking place in November 2022.

“Spain has a right of appeal within 14 days of the date of the full written decision of the committee,” read the statement.

According to Spanish media in March, the player under investigation was South African-born prop Gavin van den Berg, who has been playing in Spain since 2018.

He played twice against the Netherlands, in 2020 and 2021, in qualifiers, but he may not seemingly have served the three years of residency needed to become eligible under World Rugby rules.

Spain, Romania and Belgium were all sanctioned in 2018 for having fielded ineligible players, opening the way for Russia to qualify for the 2019 Rugby World Cup in Japan.

SPORT
What is the secret to Switzerland’s Olympic success?