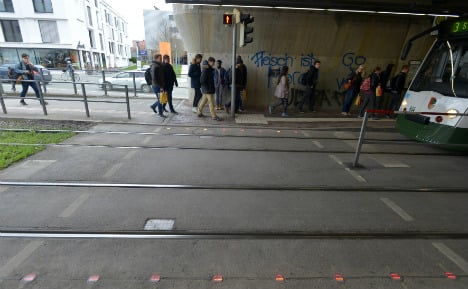 Many visitors to European cities are acquainted with the danger.

You are busy trying to navigate your way through some labyrinthine old town using a map or a phone when suddenly you feel yourself lurching to the side.

Only an attentive local dragging you by the scruff of the neck has come between you and a grisly end, caught in the fangs of the serpentine tram or bendy bus creeping up behind you.

Well, it’s not only you.

In the age of the smartphone, wide-eyed tourists and dead-eyed local commuters alike are spending ever more time gawping into a screen as they wander around town, and ever less time paying attention to the world around them.

The phenomenon has even been given its own German name, “smombie” – a combination of smartphone and zombie – which was voted “youth word of the year” in 2015.

But it’s not all a laughing matter.

In March, a 15-year-old girl in Munich was run over by a tram while looking at her smartphone with headphones in. She was dragged along by the train and died, the Süddeutsche Zeitung reports.

In nearby Augsburg, meanwhile, on two recent occasions pedestrians have been hit by the quiet electric street trains while looking at their phones, but both luckily came away with only light injuries.

The city of Augsburg has decided it’s time to act, and has installed ground level traffic lights to warn people who are looking down at their screens that a tram is approaching.

The lights have been in operation at two tram stops in the city since Tuesday and flash red when a tram is approaching or when the normal traffic light turns red.

Tobias Harms for the city administration told The Augsburger Allgemeine (AA) that “we realized that the normal traffic light isn’t in the line of sight of many pedestrians these days. So we decided to have an additional set of lights – the more we have, the more people are likely to notice them.”

Locals seemed to be largely pleased with the innovation, with one telling the AA “I think it makes sense. One always sees young people these days running over red lights. This makes it more obvious that you need to stop.”

But another local interviewed by the AA couldn’t help feeling a sense of  angst at what this said about modern society.

“I find it scary that smartphone users are so addicted that they need to install lights in the ground so that they notice the tram coming,” he worried.

As for the one teenager – the demographic most associated with smombie-ism – interviewed by the paper?

“To be honest I didn’t even notice it,” he told the paper. “Maybe it’d be useful at night, but yeah, I didn’t realize it was there until just now.”

ROADS
Who are the worst drivers in Europe?
Url copied to clipboard!