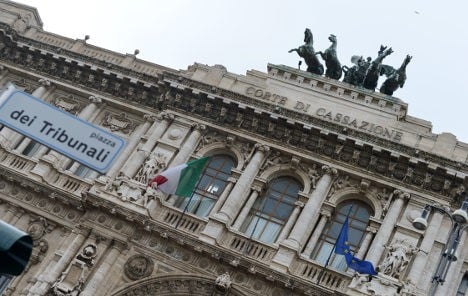 Italy's Court of Cassation has had some strange cases to solve. Photo: Gabriel Buoys/AFP

Italian courts are bogged down with cases, many dragging on for years and years. Is it any wonder when magistrates are left to resolve the likes of these?

Earlier in the week we wrote about the 50-year-old Italian woman who spent 11 years of her life trying to extract €50,000 from her ex-husband. Why? Because he failed to satisfy her sexually.

She even presented the court with a certificate from her doctor, attesting to the fact she was 'essentially a virgin', but magistrates dismissed her claims, finally ruling that there was no way to prove the man had ever refused her sex.

The case got us thinking about equally bizarre rulings that have gone as far as Italy's top court, the Court of Cassation.

Here are just a few of the gems:

You can’t tell a man ‘you have no balls’ In 2012, the court ruled it’s a crime to tell a man ‘you have no balls’. Why? Because it hurts a man’s pride. The case was brought by a man who felt hurt by his cousin’s insult, uttered during a heated exchange. In its ruling, the court said that not only was the expression vulgar, referring to the target’s lack of virility, but it also implied “his weakness of character”.

Repeatedly winking at someone is sexual harassment In the same year another odd case reached the high court as a man, protesting his innocence for years, attempted to clear his name when a lower court ruled that he molested a woman – by repeatedly winking at her. Even though he didn’t ‘stalk’ the woman, and there was no violence towards her, the persistent winking, allegedly to the chest area, was enough for the lower court to fine him €200. Unrelenting, he pursued his quest to have the blight on his otherwise clean criminal record removed, only for the top court to agree with the earlier verdict.

…but it’s OK to grope your staff

In February, a Sicilian court ruled that a 65-year-old boss was not guilty of groping female staff because he was “driven by an immature sense of humour” rather than a desire for sexual gratification. Needless to say, the ruling was widely condemned, with commentator Massimo Gramellini writing in La Stampa that the Palermo court’s decision “is worthy of lawmakers in Saudi Arabia”. Here’s another one that added to the court of cassation’s workload in 2012: a 41-year-old mature student won the right for her father to carry on supporting her. In a legal battle that waged for six years, the court said that age, or the fact her father had separated from her mother, didn't mean he could relinquish financial responsibility. In fact, the court ruled that unless he could prove his offspring was financially independent, then he must carry on paying to support her. The daughter had argued that since her parents' separation, she suffered depression and was unable to find a job to sustain herself.

In 2014, the court of cassation upheld the annulment of a marriage in Mantua because the husband was too dependent on his mother and did not pay enough attention to his wife.

Did you know the Italian Register Law forbids parents to give a boy a female name, and vice versa? In Italy, the name Andrea – a female name in many other countries – is well and truly a male name. So when a couple in Florence decided to name their daughter Andrea they well and truly set the cat among the pigeons. So much so, the Florence appeals court changed the child's name to Giulia. The couple challenged this in the supreme court, which delivered a landmark ruling in 2012, saying that the name Andrea is no longer reserved for males.

“The name ‘Andrea’, taking also into account its lexical peculiarity, cannot be deemed ridiculous nor disgraceful when given to a female, nor can it bring about any measure of ambiguity in the person’s sexual recognition,” the court said.

Making a school child write ‘humiliating’ lines is a crime

We’ve all been there: writing lines at school after getting into trouble. It’s usually seen as a harmless punishment, causing only mild shame and an aching wrist to the offender. But in 2012 a teacher was sentenced to 15 days in jail for making an 11-year-old write ‘I’m an idiot’ 100 times after the child allegedly bullied a classmate. Instead, the top court ruled that it was, in fact, the teacher who was doing the bullying, having “humiliated” the child, and so sent her to jail.

Playing loud music in your car is a crime

In February, the court of cassation upheld a November 2014 judgement by a court in Messina, ordering a man to pay a €300 fine as well as €1,000 in legal costs after he was caught playing music too loudly in his car. The court said that the Sicilian man, said to have had a ‘monster’ car stereo, had “risked disturbing peoples’ sleep” as he drove around the city late one night. In 2009, a cannabis plant-grower escaped a conviction after the top court ruled that he did nothing wrong – because the cannabis in question was not ripe, and so therefore did not contain the ingredients for it to be classified as a drug. Instead, the police were wrong to seize a cannabis plant before it reached maturity, the court said. “Investigators must pick the right moment to seize ‘do it yourself’ cannabis plants’,” the court advised. “If you do it too early, and they are not ripe, then there will be no offence”. Then again, the court added, if the police arrive too late, then they run the risk of “not finding anything”.