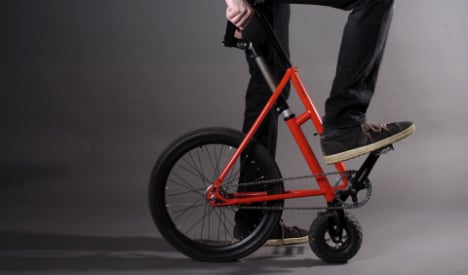 Dare you take to the streets on only half a bicycle? Photo: halbrad.de

That invention, which (of course) comes from Germany, is the halbrad (half bike).

The halbrad looks like a regular bike that’s missing its front half. It’s about one meter high and 79 cm long.

Its handlebars are located underneath the saddle, so to steer, riders must sit up straight and hold their hands below their thighs – allowing them to turn the tiny front wheel attached to a rod that descends from the saddle.

Felix Kruschardt, creator of the halbrad, came up with the idea based on his past work as an orthopaedic technician.

“The rods of wheelchairs fitted perfectly to the ones you get on bikes. I just welded them together,” he explained to The Local.

“Me and my friends managed to ride this first home-made halbrad.”

The Berlin-based inventor says that users can comfortably ride at up to 28km/h – or at a walking pace alongside friends on foot.

Kruschardt adds that the bike’s low weight and small size make it one of the lightest bikes on the market at just 9 kilos. And a further practical feature that comes with small size is the right to bring it along on the train without needing an extra ticket.

“You have a bike you don’t need to unfold that saves a lot of space, it’s handy. It’s made to be taken with you wherever you go, you don’t even need a lock.” Kruschardt explained.

Those practical questions, though, might not bother the market of young city dwellers out to make a mark on their neighbourhoods who Kruschardt thinks might be interested.

“Maybe it’s a thing for hipsters, even if I don’t like the word hipster. It’s new, everyone looks at you while riding it, it’s surprising.” Kruschardt says.

The one catch for riders in Germany? The halbrad isn’t 100 percent street-legal.

Under German law, bikes must have two independent brakes – where the halbrad has just one.

Kruschardt argues that that’s no more significant than if you were riding a racing bike with no lights attached – although that’s not an argument likely to work on police officers at a traffic stop.

If you’re willing to take that risk, though, then you have a chance to get hold of one of the first ten handmade halbrad prototypes for €1,250.

The price for the first ten handmade prototypes of halbrad is €1,250 each – and they’re only available via crowdfunding platform startnext.

But even if the crowdfunding call doesn’t raise the necessary money, Kruschardt believes that somehow he will get his product onto the market.

“We’re just dipping our toe in the water,” he said. “The crowdfunding is a barometer [for interest in the product]. It’s fun, it’s a great product, and we’ll keep going.”