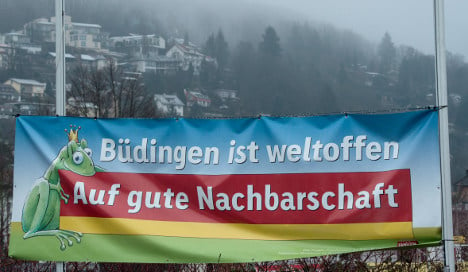 A sign reading in the town of Büdingen near the crash that reads "Büdingen is open-minded. Here's to being good neighbours". Photo: DPA

The far-right politician was less than grateful to the refugees who saved him from a car crash last week, saying that at the time of the rescue he was “not conscious,” according to a post he wrote on Facebook on Wednesday.

“I can therefore neither confirm nor deny that that a Syrian refugee had helped me out of the car,” Jagsch wrote, casting doubt on the reports made by multiple media outlets.

Frankfurter Rundschau reported on Thursday that they had confirmed with regional government officials that the two main rescuers were refugees, one from Syria and the other from Sudan. The local fire department has also confirmed that refugees were the rescuers.

“I thank all of those who were there to help me and ask that you understand that for health reasons, I cannot give any more statements at this time,” Jagsch continued in the post, which appears to have since been taken down.

Jagsch also told broadcaster Hessicher Rundfunk that “if it is so that Syrian refugees helped me, that would be commendable. But if I read that in a newspaper, it is still not factual to me.”

The far-right politician had somehow smashed his car into a tree last Wednesday while driving towards Büdingen, Hesse, where his party managed to win more than 14 percent of votes in a recent municipal election.

The first people on the scene of the crash were the asylum seekers, who had been travelling by bus along the same road.

After news of the rescue, the NPD’s leader in Hesse, Jean Christoph Fiedler, responded with half-hearted praise of asylum seekers, saying they had “likely performed a very good and humane deed,” he told the Frankfurter Rundschau.