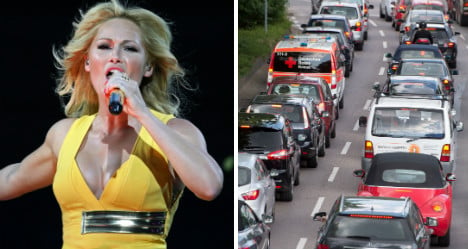 She stands almost zero chance of any artistic recognition even 5 metres outside the borders of the Bundesrepublik. Yet when Justin Bieber released his album in the same week as her collection of Christmas songs late last year, there was only ever going to be one winner.

Fischer's album became the best selling record of the year – despite only going on sale in December. And in second place? Fischer’s 2013 offering Farbenspiel – naturally, the best selling album of the previous two years.

And now it seems her hits – including Atemlos durch die Nacht (breathless through the night) and Fehlerfrei (faultless) – are not only assaulting the German airwaves, they’re bringing traffic to a standstill too.

Data collection by the satnav firm Tomtom released on Tuesday shows that the worst day for traffic in a German city in 2015 was Thursday June 18th in Stuttgart.

The probable cause? A deadly combination of rainy weather and a Helene Fischer concert, Focus magazine reports.

Crowds flocking to watch Fischer rattle out the hits weren't the only reason Stuttgart commuters were left with their hands on the horn, though.

In the capital of Baden Württemberg, which has repeatedly topped such lists due to its location holed up in a narrow valley, commuters had to reckon with an average of 20 minutes waiting in traffic every day in 2015.

Along with average commuting time, that all added up to a horrendous three extra work weeks spent in their car over the 12-month period.

Hamburg and Cologne weren’t much better though. Commuters face daily delays of 18 minutes in these cities. And the other two cities with over a million inhabitants, Munich and Berlin, also saw average delays at 17 minutes a day.

The cause of huge tailbacks was normally weather, Focus reports. In Hamburg, Cologne and Munich the year’s worst traffic was always accompanied by heavy rain or snow.

So to all those commuters raging at the miles of traffic stretching up their Bundesstraße, just one piece of advice – don’t put on the radio.