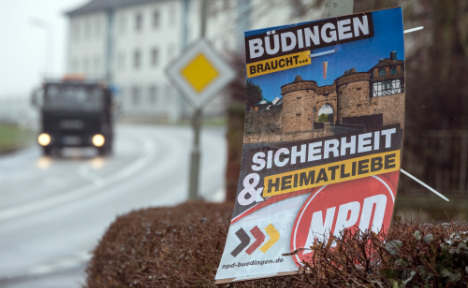 An NDP poster in Büdingen reads 'security and love for your homeland.' Photo: DPA

Stefan Jagsch was Spitzenkandidat (lead candidate) for the NPD in recent local elections in Altenstadt in the state of Hesse, Frankfurter Rundschau reports.

According to his party, Germany’s asylum laws have allowed criminals to flood the country.

Election posters focused on foreigners and their alleged criminality with slogans such as “If Ali is a criminal send him back home pronto!” or “For a safe life end the flood of refugees.”

The NPD managed to win more than 14 percent of the vote in the town of Büdingen, which lies next to Altenstadt.

But in an irony which will surely not pass over the head of the NPD politician himself, Jagsch was saved by the very foreigners he wants to keep out of Germany, when two Syrians found his car wrapped around a tree after a high speed crash.

Police report that the 29-year-old was driving to Büdingen at around 9am last Wednesday morning when his car came off the road for as yet unexplained reasons.

The collision with the tree left him seriously injured.

The first people to the scene were a group of asylum seekers who were travelling by bus along the same road.

Two Syrians pulled Jagsch from the wreckage and administered first aid treatment until the first ambulance arrived. The NPD man was then brought to hospital.

The NPD’s leader in Hesse, Jean Christoph Fiedler, responded with praise of asylum seeker probably even he didn't expect to hear coming from his own lips.

The refugees had “likely performed a very good and humane deed,” he told the Frankfurter Rundschau.

As to the condition of his party colleague, Fiedler said that Jagsch’s condition was “to be expected in the circumstances.”

Social media were abuzz with users noting the irony of foreigners coming to the aid of a member of the openly-racist NPD party.

“Now the foreigners are even taking away our first aid,” quipped one user on Facebook, while another commented that “destiny has a sense of humour”.

Responding to the incident on Twitter, Hesse’s economy minister Tarek al-Wazir of the Green Party cited an Arabic saying that translates “Shame your enemies through your decency.”

Note: This article has been corrected to show that the NPD won more than 14 percent of the vote in Büdingen in recent elections.