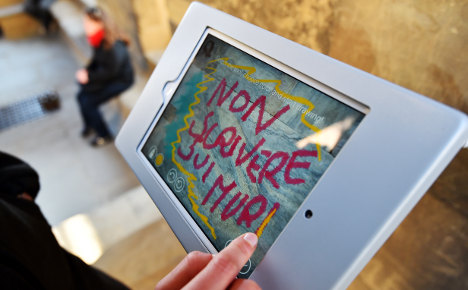 A digital graffiti reading "Do not write on walls" on a tablet screen in Florence. Photo: Vincenzo Pinto/AFP

“Welcome to Giotto's Campanile!” reads a message on a digital tablet for visitors scaling the Gothic white, green and pink marble tower by the famed Italian architect, which stands at one corner of the Cathedral in the Tuscan city.

“We have been protecting masterpieces for centuries: starting from today we are going to remove graffiti from the Campanile's walls. But if you – virtually – leave us a message, we will preserve it: just like a masterpiece,” it says.

The walls of the 14th-century bell tower, which is part of a Unesco World Heritage Site, have been defiled down the ages by millions of messages left by people climbing the 400 steps to enjoy spectacular views of red-tiled rooftops.

“Three months ago, when we began cleaning the walls, which had never been done before, we asked ourselves how we could avoid all the work going to waste in a short time,” said Alice Filipponi, social media manager for Opera di Santa Maria del Fiore, a not-for-profit organization tasked with preserving many of Florence's monuments.

Architect Beatrice Agostini, who heads up the organization's restoration arm, said the bell tower “was in an incredibly degraded and dirty condition”, with all elements – marble, stone, wood and brick – damaged by graffiti.

Filipponi said she had “an idea for an app which would allow the visitor to choose the surface (marble or wood for example), the colour and the instrument they want to use (felt pen, paintbrush, aerosol) to leave a virtual message or drawing”.

The application, which is named “Autography” and launched last week, is “a first”, she told AFP, saying she hoped to sell it to other sites plagued by heritage hoodlums.

Three digital tablets have been installed on the 1st, 3rd and 4th floors of the tower and the messages are stored online. Over 700 personalised scrawls were collected in the first week.

Just like on the tower's walls, where statues of kings and sibyls once stood, the messages range from declarations of adoration, despair over unrequited love and appeals for peace, to the simple “Pietro was here”.

They will be printed out each year and filed away in the Cathedral's archives, alongside historic documents such as the deed appointing Renaissance designer Brunelleschi to build the Duomo's dome, and the birth certificate of Lisa Gherardini, widely considered to have been the model for Leonardo da Vinci's Mona Lisa.

“The idea was to raise awareness among visitors about vandalism, but also give them the chance to leave behind a record, an everlasting sign of their passing through, without damaging the monument,” the Opera said in a statement.

From smiley faces to hearts and doodled names, graffiti is the bane of restorers' lives and is laborious to remove.

While the cleaning job on the tower's walls has managed to wipe off most of the pen or paint scribbles, words etched into the stone are still visible despite all efforts.

Undeterred, conservators will turn their scrubbing brushes next year to the Cathedral's dome – the largest such structure in brick ever constructed – and install tablets with the Autography app there as well.

HISTORY
Dante’s last laugh: Why Italy’s national poet isn’t buried where you think he is

A man was found dead on Saturday in the Hotel Continentale after a woman he was with cried out for help, according to unconfirmed media reports.

Italian news outlets have identified the victim as Ricky Bibey, a two-time Challenge Cup winner with Wigan Warriors and St Helens. Police have yet to confirm the dead man’s identity.

Super League tweeted it was “saddened to hear of the passing of Ricky Bibey”.

“We thank Ricky for his contributions to the game and send our condolences to Ricky’s family and friends during this time”.

Super League are saddened to hear of the passing of Ricky Bibey, aged 40.

We thank Ricky for his contributions to the game and send our condolences to Ricky's family and friends during this time. ❤ pic.twitter.com/hokOo8GPjh

A maid rushed in to find the 43-year old woman bleeding heavily from serious injuries, and she was rushed to hospital, La Nazione daily newspaper said.

Bibey, 40, appeared to have died of a heart attack, it said.

Other guests at the Continentale, just next to the Tuscan city’s famous Ponte Vecchio bridge, reportedly heard shouts coming from the room.