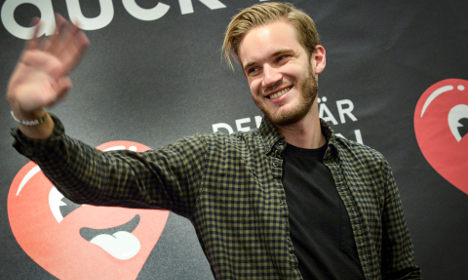 Swedish gamer Felix Kjellberg – far more well known by his internet alias 'PewdiePie' – was among the top-30 most influential world wide web celebrity when the magazine released its list late on Wednesday.

Also on the list was US presidential hopeful Donald Trump, who touts seven million followers on Twitter and is famous and infamous in equal measure for using social media to hurl insults at his rivals.

26-year-old Kjellberg boasts a record 42.7 million subscribers on YouTube and recently struck a deal with Disney's Maker Studios to produce original videos for newly-launched RevelMode: a new entertainment network which is likely to help the digital star expand his media empire even further.

The Swede, who rose to fame by filming himself playing video games and posting the clips online, raked in around $12 million in 2015, according to Forbes – making him the highest paid YouTuber.

READ ALSO: Here's how YOU can trump Donald Trump

Listed first of the unranked bunch of 30 was another controversial American Twitter user, rapper Kanye West, who, according to Time Magazine, “has perfected the art of the Twitter spree, sharing candid thoughts that are often just as provocative – if not more so – than his music”.

The rapper recently caused a stir in Sweden when he visited the Ikea headquarters in the small town of Älmhult. He later tweeted he was working on a design project with the Swedish furniture giant.

COVID-19
Coronavirus: What you need to know about Trump’s Europe travel ban
Url copied to clipboard!