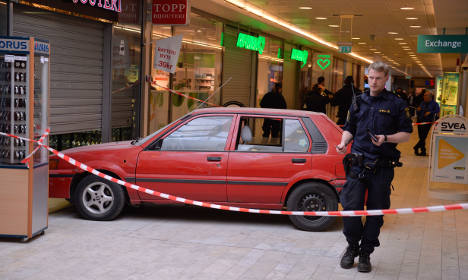 A police cordon at the scene of the robbery. Photo: Vilhelm Stokstad/TT

“The three robbers are said to have had some kind of weapon and one of them reportedly fired a gunshot into the air,” police press spokesperson Hesam Akbari told the TT newswire on Wednesday morning.

According to officers, who were called out to the incident in the Botkyrka suburb at around 10.30am, no one was injured, but several people were left shocked and scared.

A police helicopter has been called in to search for the trio, who fled the scene in a black BMW.

“We are searching the area for the car and the culprits. We are also talking to witnesses and are carrying out a forensic investigation to secure any traces of evidence,” said Akbari.

An unnamed witness told TT the men were dressed in black: “Two of them went into the store and one guarded the entrance. When I'm five metres from the store he screams: back up or I shoot.”

Police said the men took jewellery, but were not immediately able to confirm the value of the haul.