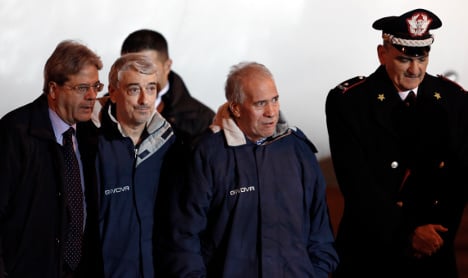 Gentiloni  told the Senate on Wednesday that no ransom was paid for Gino Pollicardo, 55, and Filippo Calcagno, 65, who arrived back in Italy on Sunday.

They were among four employees of the Italian construction firm, Bonatti, kidnapped in the Millitah region, west of Tripoli.

The other two – Salvatore Failla, 47, and Fausto Piano, 60 – were killed on Thursday in clashes between jihadists and militiamen.

Calcagno and Pollicardo, who had been separated from their colleagues, managed to set themselves free on Friday after Calcagno loosened the lock of a door using a nail.

He told reporters from his home in Sicily on Sunday that the door eventually opened after several attempts.

“But I worked a lot on that door. I understood that you can do many things with a nail.”

After the lock was loosened, Pollicardo, from Liguria, helped to kick the door down. They then found a second door, which was unlocked, and walked out onto the street.

Calcagno said the four colleagues were separated on March 1st, with captors indicating that a deal had been reached.

“We were told it was over,” he said, adding that the men had endured “beatings, thirst and hunger” during almost nine months in captivity.

“Failla and Piano were taken away while we remained inside.”

Italian media reports said Piano and Failla had been in an Isis group convoy that was attacked by militiamen from Fajr Libya (Libya Dawn), the armed wing of the non-recognized government based in Tripoli.

But Gentiloni said there was no evidence that Isis was involved in the abduction, adding that “the most probable hypothesis” is that pro-Islamist criminal groups operating between Mellita, Zuwara and Sabratha were behind the kidnapping.

He also downplayed reports that Italy was readying to take part in an international mission against Isis militants in Libya, saying that Italy would only get involved if requested to by Libya, and with the approval of Italy’s parliament.

“We need to avoid Libya sinking into chaos where tragic episodes like this one involving our hostages can proliferate,” he said earlier this week.

The coastline of the Sicilian island of Lampedusa. Photo: Alberto Pizzoli/AFP

The peace conference in Palermo on November 12 and 13 will aim to “identify the stages of a stabilisation process”, Italian Foreign Minister Enzo Moavero Milanesi told the Senate.

The meeting would drive towards “a common solution, even if there are differences of opinion between the parties involved”, he said.

Four key leaders from Libya agreed at a conference in Paris in May to hold landmark polls on December 10 as part of a French-led plan to stabilise the crisis-hit country despite ongoing violence and deep divisions.

France, however, has faced opposition to the election timetable from the United States along with other European Union countries, notably Italy.

Milanesi said he had received “confirmation of interest” in the conference from Libyan military strongman Khalifa Haftar as well as support from the US, and was planning on discussing the dossier with his Russian counterpart Sergei Lavrov in Moscow on Monday.

“No deadlines will be imposed on the Libyans, nor tasks dictated,” Milanesi said.

Italy, a key supporter of the UN-backed government of Fayez al-Sarraj in Tripoli, said in September it wants to “maintain an active dialogue” with all well-intentioned actors in Libya.

The Libyan capital has been at the centre of a battle for influence between armed groups since dictator Moamer Kadhafi was driven from power and killed in a 2011 NATO-backed uprising.

Sarraj's Government of National Accord has been unable to form a functioning army or regular security forces and has been forced to rely on militias to keep Tripoli safe.

Militias formed the backbone of the uprising that toppled Kadhafi.

Since then rival administrations, including one allied with Haftar and based in the remote east, and the militias have competed for authority and oil wealth in the North African country.

Accused by his opponents of wanting to establish a new military dictatorship, Haftar refuses to recognise the authority of Sarraj's Tripoli-based GNA.