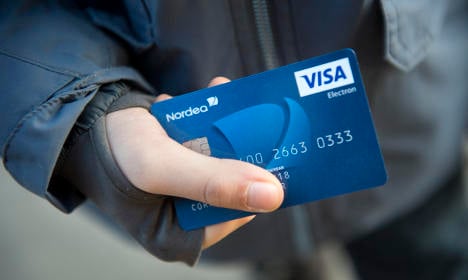 A Swedish visa card. Photo: Jessica Gow/TT
The Nordic country has already earned a global reputation for its move towards having a cash-free culture. Now, new research commissioned by the credit firm company Visa suggests that Swedes are not only using payment cards more often than people in most other nations, they are also using them for smaller amounts of money.
According to Visa, the average card purchase in Sweden amounts to 301 kronor ($35), while the European average is 459 kronor ($54). People living in Sweden also use their cards more regularly than those living in all other countries except Finland, the study suggests.
Swedes made an average of 207.1 payments per card in 2015, excluding cash withdrawals. In France, by contrast, the figure was 141.7. Finland topped the table with a mean figure of 242.7 recorded over the 12 month period.
“Together with the other Nordic countries, Sweden is among the world leaders when it comes to paying with cards,” Visa's manager for the Nordics, Martin ten Houten said on Monday.
Visa, working in cooperation with the polling firm Sifo, also asked Swedes whether or not they would be willing to use a card to make a payment of less than 10 kronor.
65 percent of people asked said that they would, rising to 85 percent of 18 to 34-year-olds.
The global card company said it expected that figure to rise in the coming months as more stores start offering contactless payment, which means customers only need to tap a machine with their card in order to make a purchase, rather than having to key in their pin codes.
The mechanism is already popular in Poland and France as well as the UK, where passengers can now even make contactless transactions on busses in the capital as well as on the London Underground, instead of buying a travel pass. A contactless card reader. Photo: Christine Olsson/TT
However Visa's study comes amid ongoing campaigns highlighting concerns about the move towards a near-cashless society.
Critics have laid into banks for closing rural cash machines or refusing to handle cash at certain branches, while some stores and events are also banning any non-card payments.
“People are left out because they are not profitable: pensioners, immigrants, people in sparsely populated areas, former criminals. It's not fair,” said former national police chief and head of the campaign group 'Kontantupproret' (The Cash Revolt) Björn Eriksson in an interview with the TT news agency on Monday.
READ ALSO: Why Sweden should fear going cashless
An online protest by the group has already attracted more than 3000 likes on Facebook, in a country of just under 10 million people.
“It annoys me that the four major banks are free to make it as difficult and expensive as possible to use cash so that we all switch over to cards, so that they can then raise the card fees and make even more money,” Eriksson added.
Last year the campaigner told a conference at Almedalen — Sweden's largest political gathering of the year — that some people were taking drastic measures to deal with the shift.
“I’ve heard of people keeping cash in their microwaves because banks won’t accept it,” he said.