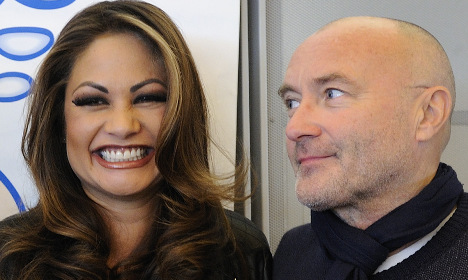 “Our separation was the wrong decision,” Orianne Collins, who split from the famous soft-rocker a decade ago, told the SonntagsBlick weekly.

“I now call Phil my husband again. We are so close that it does not actually make a difference if we are married or not, but we are determined to get married for a second time one day,” the 43-year-old Swiss national said.

The couple, who married in Switzerland in 1999 and have two sons together, split up in 2006 and were divorced two years later.

It was the third marriage for Collins, now 64, who has three other children by his previous marriages.

After their divorce, Orianne remarried to investment banker Charles Mejjati, with whom she has a son, and moved the family from Switzerland to Miami.

This was one of the factors that Phil Collins has acknowledged sparked a dark period in his life when he slipped into alcoholism, but he stopped drinking and later moved from Switzerland to Miami himself to be closer to the family.

Orianne, who reportedly recently filed for divorce from Mejjati, told SonntagsBlick that she had never completely stopped loving Collins.

“We were always very close, because of the children,” she said, adding though that “just last year, I realised that he is indeed the man of my life.”

Collins, she said, had helped her through the ordeal after she was left partially paralysed following an operation in late 2014 for a slipped disc in her neck.

“I spent four months in hospital, and he took wonderful care of Matthew and Nicholas,” the couple's two sons, she said.

“That was a great relief to me,” she said, adding that the experience had helped bring her to the realisation that “we are meant for each other.”