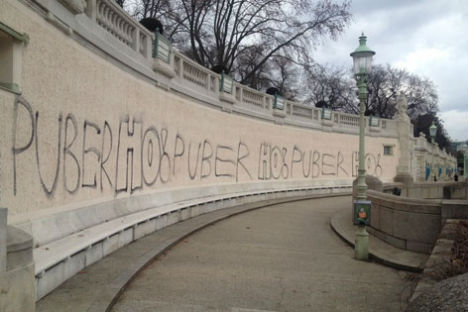 30-year-old Swiss national Renato S. was sentenced to 14 months in prison in March 2014 for plastering buildings in Vienna with his ‘Puber’ graffiti tag. The judge ruled that he had caused criminal damage amounting to around €50,000. Puber served ten months of his sentence and then moved back to Zürich.

Martin Ho, who runs the HO gallery which will be showing Puber’s work said that the idea is “to get Vienna talking, and maybe help people understand Puber’s work”.

The exhibition is called ‘I Like to Write my Name on your Property’ and opens on February 17th.

“Puber’s work is quite unique in Austria – it’s the kind of thing that’s common in New York but here it causes a stir and even splits opinion in the graffiti scene,” Ho said. “There are very few graffiti sprayers now who would dare to leave their name everywhere.”

Puber’s graffiti works have been exhibited in other galleries, with price tags as high as €1,500.

Puber, who left his mark mostly around the 7th district, was extremely unpopular with many Vienna residents and even with other graffiti artists as he would spray his tag over their work. He also sprayed over children’s murals. Some local newspapers referred to him as “public enemy number 1”. However, he also had his fans and even imitators.

Vienna lawyer Georg Grubhofer said that if Austrians “Arnulf Rainer and Hermann Nitsch are considered artists, then Puber should be too”.

However the curator of the Kunsthaus Zürich gallery, Catherine Hug, is more sceptical: “You can call it art. But whether it’s any good, is a different question.” 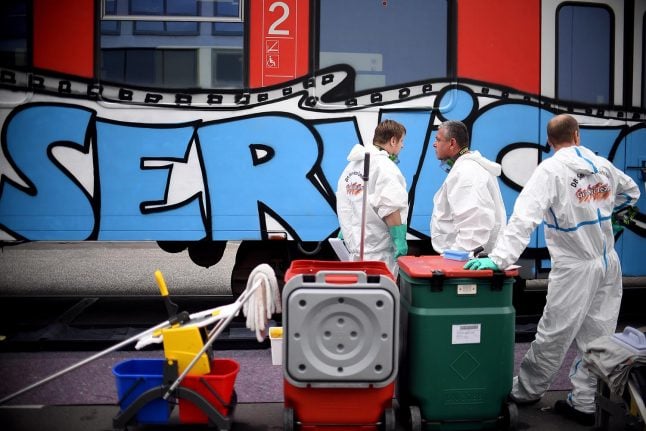 A cleaning crew removes graffiti from a train. Image: DPA

Police say that graffiti is most commonly a problem in larger cities, although there are incidents all over Germany.

The most problematic cities for authorities are Berlin, Hamburg, Halle and Leipzig, along with metropolitan areas in Baden-Württemberg and North Rhine-Westphalia.

There are disagreements as to the trend of the problem. While police indicate that the figures are gradually decreasing, reports from Deutsche Bahn show that the problem is on the rise.

As reported by DPA, the impact of graffiti isn’t purely aesthetic damage. Costs and train delays are a major issue as a result of graffiti.

Graffiti on the train lines and at stations has a variety of messages, from political messaging to support for football teams.

Those behind the graffiti are also a diverse group, from bored teenagers to organized gangs.

Police told the Berliner Morgenpost that ‘graffiti tourism’ was increasingly a problem in the city, with budding graffiti sprayers coming from other parts of Germany – and indeed other countries – to make their mark in the Hauptstadt.

Police cited the recent detention of a 16-year-old Australian tourist in relation to property damage offences as an example of the growing problem.

While Berlin's street art culture is a big tourist magnet, the police said they consider any form of graffiti on trains or stations to be property damage — no matter its artistic merit.

Other than tourists, organized local gangs are also frequently responsible.

In Berlin, an organized team of graffiti sprayers chose the day of a recent train strike to launch a coordinated assault on the city’s public transport.

In total, 140 wagons were sprayed – with the paint covering an estimated 2,000 square metres. Graffiti on a station building in Leipzig. Image: DPA

“Not an increasing problem”

A spokesperson for the Federal Police told The Local that while graffiti was still a significant issue, “graffiti on trains is at the moment not an increasing problem”.

Figures obtained by The Local from the Federal Police show a slight overall decrease in relation to previous years.

The spokesperson told The Local “it would be impossible to determine the (graffiti) situation on lines run by regional operators as trains often run through several states”.

An increase on Inter City Express trains – and at stations

However figures provided by Deutsche Bahn indicated a trend in the opposite direction. In 2018 graffiti increased by eight percent, with 20,100 cases recorded.

Unlike the figures from the Federal Police, the Deutsche Bahn figures take into account all incidents of graffiti both at train stations and on long-distance trains.

Deutsche Bahn estimated the damage to be in the vicinity of €38 million. While the company spent €13 million repairing the damage caused by graffiti across 2018, much of it is not removed.

Berlin’s BVG, responsible for the city’s public transport, estimate a yearly spend of €10 million on graffiti removal in Berlin alone.

Delays and higher costs for passengers

Officials have pointed out that the effects of the graffiti are not purely aesthetic.

The board production DB Regio, Oliver Terhaag, told DPA: “Unfortunately, the effects of graffiti are also felt by our passengers. The affected cars are taken from the fleet, so then shorter trains are on the way, which are sometimes extra full,” he said.

“At stops it could cause delays in getting in and out, which has a negative impact on punctuality.”

The steps taken to prevent and clean up graffiti also result in more expensive costs imposed on passengers.