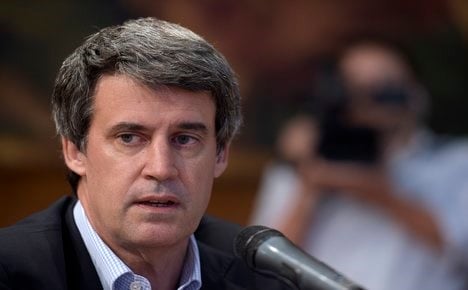 Argentina's Finance Minister Alfonso Prat-Gay said a preliminary deal was struck to settle their claims on about $900 million worth of bonds. Photo: Eitan Abromovich/AFP

Finance Minister Alfonso Prat-Gay said a preliminary deal was struck to settle their claims on about $900 million worth of bonds, by face value, marking a major advance after Buenos Aires fought for years to avoid paying those who refused to join its debt restructuring.

The Argentine minister did not say how much the Italians would be paid.

But in a statement, Task Force Argentina, which represents the Italian bondholders, said they would get 150 percent of the face value, or some $1.35 billion.

That is 46 percent below the $2.5 billion that TFA asserted claims for, including interest, at the World Bank's ICSID arbitration tribunal.

Prat-Gay said the Italian agreement was a step forward as the country seeks a deal to settle claims by other so-called holdouts in New York, including two hedge funds the previous Argentine government refused to pay despite a US court order to do so.

Talks opened in New York on Monday between Argentine Finance Secretary Luis Caputo and those creditors, mediated by a court-appointed lawyer, Daniel Pollack.

“We are making progress, one day at a time,” Caputo told reporters after eight hours of discussions. He also said a specific offer by Argentina could be forthcoming Wednesday or Thursday.

The talks cover some $9 billion in holdout claims, including the $1.75 billion of the two hedge funds, NML Capital and Aurelius Capital Management.

But the Italian claim is not part of those talks.

“We are trying to close the gap that we have with the much tougher (New York) litigants but in the interim we have arrived at this preliminary accord,” said Prat-Gay.

Pollack said in a statement after Monday's talks that they involved an informal discussion of ideas toward a resolution of the claims.

After years of dead-end discussions under the former Argentine government of Cristina Kirchner, her successor President Mauricio Macri is seeking to clear away the debt battle to reopen the country's access to global capital markets and revitalize the Argentine economy.

Argentina defaulted on about $100 billion in debt in 2001. By 2010, it had restructured about 93 percent of that through bond swaps with creditors, who accepted large writeoffs of the value of their bonds.

But the rest of the bondholders held out for full payment, including the hedge funds.

In 2012, a New York court backed the claim for 100 percent payouts sought by NML Capital and Aurelius Capital.

But Kirchner refused to negotiate, branding them “vultures” because they bought up Argentine debt cheaply around the time of the default and then refused to take part in the restructuring.