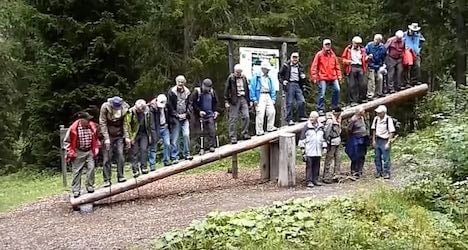 It began as harmless fun when 14 of the group decided to pose for pictures while standing on a long wooden seesaw in a wooded area of the region in the canton of Graubünden.

One by one they climbed on to the seesaw, which teetered up and down before a couple at one end lost their balance, pushing others off with a falling dominoes effect.

The incident, which occurred last September, was filmed and has subsequently gone viral on the internet, drawing such references as “the great broken hip disaster”.

It turns out that, joking aside, some of the seniors were seriously hurt.

Alpin Medic, an emergency rescue service in Arosa, responded to the accident to deal with several injuries, 20 Minuten newspaper reported.

“It was the end of the summer,” the manager of a bistrot four kilometres from Arosa told the daily in recalling the incident.

“Many customers told us that numerous pensioners had fallen off a see-saw and they were taken away on several ambulances.”

The seesaw is located on a “learning trail” between Arosa and Litzirüti with information about protecting the forest, Pascal Jenny, director of Arosa Tourism told 20 Minuten.

Jenny said the seesaw is not itself dangerous but the way it was used by the seniors group “is not something to recommend”.

Check out the video below: