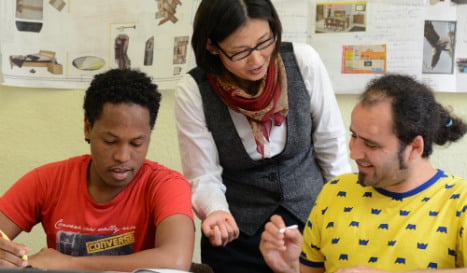 An integration class in Leipzig in June 2015. Photo: DPA

“If you come to us seeking protection and wanting to start a new life, you have to stick to our rules and values,” Nahles wrote in an op-ed for the Frankfurter Allgemeine Zeitung.

“If you signal that you can't integrate, your benefits will be cut.”

Nahles added that migrants' welfare payments should be linked to their attendance at German language classes and to their behaviour.

Anyone seeking help in Germany must “bring all of their abilities, their strength to work and their own property,” the Social Democratic Party (SPD) politician said.

Nahles also announced that she had tasked her ministry with producing a new draft law on integration to slash bureaucracy and set aside cash resources to fund the process.

Meanwhile, the minister also turned her fire on migrants from inside the European Union.

Newcomers from the EU should stand on their own feet – “and not rely on social benefits right from the start,” she wrote, adding that this had never been the idea behind freedom of movement in Europe.

Nahles acknowledged that by far the largest proportion of EU migrants did work and earn their keep after arriving in Germany.