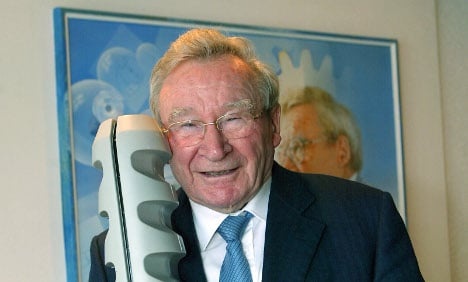 Artur Fischer with a jumbo-sized model of his invention, the wall plug or screw anchor. Photo: DPA.

From edible children's toys to a tool that DIY fanatics can't live without, Artur Fischer's long list of inventions was diverse to say the least.

Fischer died on Wednesday in the Black Forest town of Waldachtal, Baden-Württemberg, “peacefully in his sleep at home surrounded by family,” his company Fischerwerke announced on Friday.

Fischer was most well-known for inventing the plastic dowel – also known as a wall plug or screw anchor – which was a boon to the do-it-yourself construction world as it helps to fasten a screw to brittle or porous walls and material.

By his death, Fischer had more than 1,100 patents and utility models (like a patent, but for a shorter term), earning him the unofficial title of “patents king”. This number also put him in league with American inventor Thomas Edison, who has 1,093 patents.

The Local looks at some of Fischer's most fantastic finds.

Fischer's first patent was for synchronized flash photography in 1949. He reportedly wanted to do away with the fire hazard of the former magnesium flash technique.

So simple, yet so useful, the wall plug Fischer invented in 1958 is a plastic tube that expands as a screw is fitted, allowing screws to be attached to material that otherwise could not support the weight of something attached to the screw.

An estimated 14 million wall plugs and anchors are produced around the world every day, according to the European Patent Office.

Toys that children can play with – and without parents having to worry what might happen if the child eats them. One of Fischer's most recent creations, these moldable building blocks are made of potato starch and natural food colouring.

Fischer put his anchoring tools to another use – fixing broken bones. He invented several kinds of tools that can be used medically to mend fractures.

The fischertechnik construction sets for kids were first put on the market in 1964, becoming bestsellers. These kits have become a “global standard for educational toys” because they give children an “understanding of technology and help them develop hand-eye coordination, fine motor skills, spatial awareness, logical thinking and creativity,” according to the European Patent Office.

Even professional engineers have used earlier products to simulate robots and build models because of the tools' great precision.