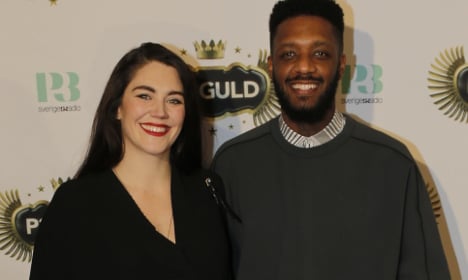 Tensta, who took his name after the Stockholm suburb he was born in to a Swedo-Finnish mother and a Gambian father, raps about how he promises to do everything to protect his son or daughter from racism in his new single 'Svart Bäbis' ('Black Baby'), released earlier this month.

“[It] is the most beautiful thing I have heard and is a way for Adam to deal with his emotions around knowing that our child will be exposed to shit because of the skin colour he or she will have,” wrote Nordlander in a blog post for the Nöjesguiden entertainment magazine, of which she is the editor.

“Myself, I just walk around enjoying the song and feeling confident that he will be the best person ever to prepare someone for growing up as black in Sweden. I can't relate. I am white, the feeling doesn't quite reach all the way even though the song obviously helps.”

The blog post was published earlier this month. But it hit the headlines again on Tuesday after Tensta took to Twitter to reveal a selection of comments posted on Nordlander's blog.

“I hope you won't be disappointed in the kid if it's not black enough in your eyes,” read one. Another wrote: “Thanks for literally committing an act of genocide you f—–g traitor.”

“Nice bestiality fetish c–t. I hope you enjoy being a single mom once your monkey-man ditches your stupid ass,” wrote a third person.

It is not the first time Nordlander and Tensta have faced racist attacks over their relationship and she told The Local that she was cross.

“I am not at all surprised. But I don't want to stop being shocked, angry or sad either, because then it's like I'm adapting. I'm not the one who should change. They are.”

But she said the comments felt more hurtful than usual because they were directed at her future baby.

“That [the pregnancy] is what is new to me in this case, so of course it affects me more. I am relieved that the baby is still inside the belly, but I also feel incredibly safe and happy that my child will have Adam there. Few people would be as great to have by their side when growing up as black in Sweden.”

Tensta has spoken openly about racism in Sweden and his feelings about becoming a father, even featuring in a pregnancy video blog and becoming a new columnist for Swedish parents' magazine 'Vi föräldrar' ('We parents').

In his first column he writes “There are a lot of people out there who don't think you're a real Swede. You shouldn't listen to them, my baby”.

Race and immigration have become increasingly divisive topics in Sweden, which has taken in unprecedented numbers of refugees in the past year and where the anti-immigration Sweden Democrats are currently polling at around 20 percent.

“As a journalist it is unusual not to get exposed to racists and other haters. I have since I started working. It's enough that there's a field for comments or email for these comments to come, what you've written doesn't necessarily even have to be about, say, integration. An article about cheese can also lead to all sorts of crap,” said Nordlander.