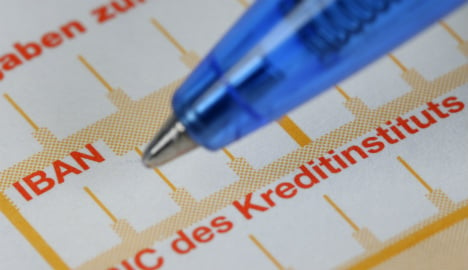 “A small minority of people are still sticking to the old bank account number,” despite most people getting used to the 22-character IBAN (International Bank Account Number) that will replace it, Bundesbank (German central bank) board member Carl-Ludwig Thiele said on Sunday.

Around ten percent of people still stick to the old way of doing things, Bundesbank figures show. That's mostly people who don't use online banking out of security fears and older people who prefer the paper system they are used to.

But banks are expected to no longer correct such customers who fill out their forms incorrectly after the changeover on February 1st.

What you need to know

In fact, there is little difference between the old system and the new.

As experienced IBAN users will know, the code consists of four parts:

– A country code, such as DE for Germany

Many banks, such as Sparkasse banks, already print customers' IBAN on the back of debit cards for easy reference.

Otherwise, it can be found via your online banking service or on bank statements.

And one piece of good news: since the IBAN is an international identifier, you will no longer need to give a BIC (Bank Identifier Code) when transferring money abroad from February 1st.

The change is being made to simplify bank transfers within the 28 nations of the European Union, and some neighbouring countries, who have all signed up to the Single Euro Payments Area (SEPA).

Businesses, civil society organizations, and administrative bank users already made the switch in August 2014 – which the Bundesbank at the time said had gone completely smoothly.

If you want to find out more about SEPA, or have questions about IBAN, visit the Bundesbank English website here.